By World_breaks (self media writer) | 1 year ago 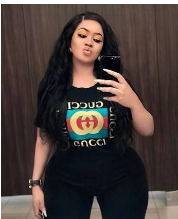 Vera Sindika is a celebrated Kenyan socialite and media personnel whose real name is Vera Sindika Mung’asia. She was born on 30th day of September in 1989 and grew up in Mombasa. She is one of the most influential ladies in the country especially on social media. Vera enrolled herself for a bachelor degree in interior design in 2009 a course that she did not complete the course. She claims that her career began when she was 17 years old when she became a model.

Vera became famous back in 2012 when she appeared in P-Unit's song. She later went to United Kingdom for skin bleaching in 2014. This is when she claimed that her body was a business and source of her income. In the process she spent 15 million shillings. Vera has been in the entertainment industry for a long time and she has won competitive awards like Pulse Music and Video Awards. In 2015 she also hosted Nairobi Diaries a famous television reality show.

Vera's net worth is estimated to be approximately $2.5 million this excludes her expensive cars.

Vera is said to have been engaged to famous men like Yommy Johnson, Jimmy Chansa, Otile Brown and Dr. Badmus Daniel in past. She is currently married to Mauzo Brown.

Content created and supplied by: World_breaks (via Opera News )

Why you should not sleep with tight clothes

Raila Odinga Reacts To His Campaign Rally In Busia