By MyCaydenpol (self media writer) | 25 days ago 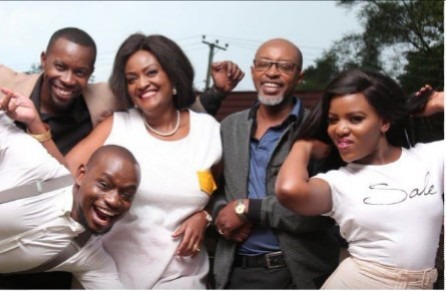 Maria show which was aired at Citizen TV at 7.00 pm,from Monday to Friday had gained a lot of fans. The characters and their hilarious skills in acting made everyone glued to their screens. Maria show was before Zora series which takes place at the same time.

Due to public demand of Maria Show,every viewer wanted the season two to feed the curiosity in their souls. What happened to Maria marriage with Luwi? What happened to William family? Were there justice to those murdered like Maria's father? Many fans are waiting to get answers to these bitter and sweet episodes.

Maria Show was produced by Jiffy Pictures a production company owned by a couple Rashid Abdalla and Lulu Hassan,where most talents are nurtured and realized too.

Marriane who was a minor actor whose real names are Botul Abdalla, worked in Hausa family as a house help. Today at Kyeni Tv,she had come with her daughter who played the role of Gloria as Lorna's daughter. Gloria real name is Asha Husseine.

Many viewers questioned about the whereabouts of other actors and actresses and Gloria just said she doesn't know. She is a young girl currently at grade three but full of courage and confidence.

The most burning question about Marriane during the interview was when will Maria Show come back to screens. Most viewers are eagerly waiting for the day when "Maria Wa Kitaa" song will run in their ears.

Marriane confirmed that they are going to come back soon as they plan and organize each other. She didn't really give the specific dates but we are hopeful that Maria Show will come back soon.

Thug, 45, Lynched To Death And Set Ablaze By Irate Mob For Attacking, Killing And Robbing A Man

Why that chest pain could be a symptom of a lung disease that can be fatal if untreated.

They Are So Lucky; Meet Kenyan Children With Both Parents As Celebrities.