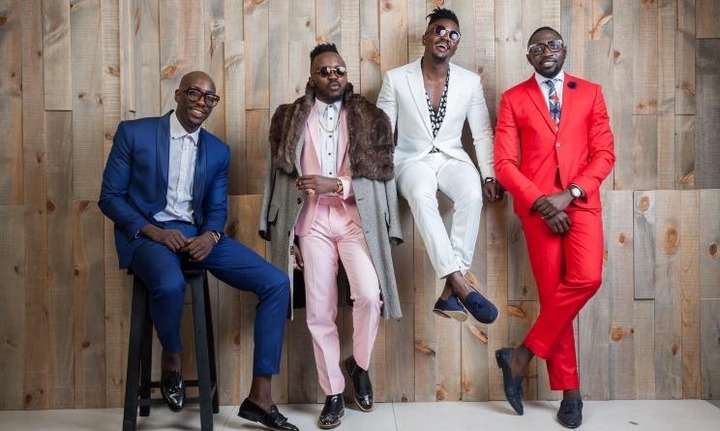 Sauti Sol is made up of four talented artists. Sauti Sol is the amazing band that Kenyans and the entire world have been jamming to for the longest time. Sauti Sol's style is so unique that they have dominated their music niche in an industry that is so flooded that making it big is an extraordinary reprieve. They are one of the most successful singing groups in Kenya.

Sauti Sol was created as an acappella group in the year 2005 by the three main vocalists namely Bien Baraza, Savara Mudigi and Willis Chimano. The trio came up with the idea during their high school days after meeting at Upper High School performing for the school's music group. It was known as the Voices in the Light.

Later, they met the guitarist known as Polycarp Otieno, at Alliance Francaise in Nairobi who was at the time attending Strathmore School .Sauti Sol members frequented the Alliance Francaise centre in Nairobi in the early years of their careers. After frequent interaction and interest in diversifying to professional music, they formed the band known as Sauti. The quartet immediately wrote their first song which was known as Mafunzo ya Dunia.

Later on, the music group later added, Sol to their name, making their full name Sauti Sol which in full means Voices of the Sun. The band went ahead to partake in a music contest known as Spotlight on Kenyan Music that was organized and facilitated by Alliance Francaise. They did well and were signed by Penya records.

Although they had started their musical journey, the four Sauti Sol members continued with their university education, each earning a professional degree upon completion. Baraza pursued a degree in Journalism, Savara studied Commerce and Finance, Chimano studied Journalism while Otieno pursued Actuarial Science.

After they were done with their studies, they concentrated entirely on their musical careers and produced excellent debut albums. Mwanzo was their debut album which was released on August 4, 2009 and was followed up by another album known as Sol Filosofia two years later.

Sauti Sol album titled Sauti Sol is one of the most decorated and celebrated musical bands in Kenya and Africa. Due to their sheer hard work and consistently through creating amazing music, they have managed to stay ahead of the game. So far, the band has produced various songs since they released their debut album titled Mwanzo in 2009.

Their second album titled Sol Filosofia was released in the year 2011, a song titled Coming Home in the album won the Best Music Video award at the 2011 Kisima Awards. The boy band group, in the same awarding event, won the Best Fusion Artist/Group of the Year. Between the years 2012 and 2015, Sauti Sol did something fantastic therefore culminating the period with an incredible single off their third album titled Live and Die in Africa entitled Sura Yako.

Currently, the group has a 13-part series in YouTube known as Sol Family that offers fans a glimpse into their personal lives and also the lives of their recording artists in their record label known as Sol Generation. In the series, fans also get to know their music-making process and what goes on behind the scenes.

Sauti Sol members have an incredible story and are talented artists who all bring different skills that when amalgamated, make a super music group. Perhaps that is why all their songs are massive hits and are extremely loved by their fans.