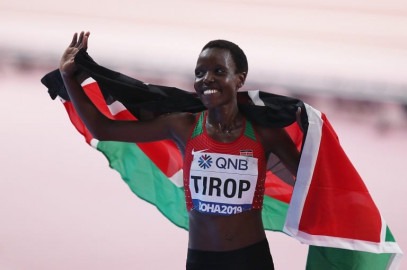 The funeral service of the late Kenyan athlete Agnes Chebet Tirop nearly turned chaotic after politicians allied to two rival parties collided in words. The kenyan shujaa who was found wounded and cold in her house was laid to rest on Saturday, a day which would have been her birthday if alive.

The political hit-hat began when one of the Kalenjin leaders MP Stephen Tarus stood up to read a condolence message from the ODM party leader Rt Hon Raila Odinga. This brought about a mixture of reactions since some of the congregants booed the MP while others applauded. Tarus however persevered the hostile crowd and read Raila's condolence message to the end.

When the Kapsaret member of parliament Hon Oscar Sudi stood up to speak, he quickly shifted from consoling the mourners to politics hence throwing attacks to Hon Stephen Tarus. According to him, he wondered how much Tarus hated the deputy president Dr William Ruto despite being one tribe and blood. Sudi also warned his colleague from continuously attacking the deputy president, asking him to respect Ruto as an elder in the Rift Valley community. Sarcastically, the Ruto allied legislator suggested that the condolence message read by Tarus was not sent by Raila.

He further used insultive words to deconstruct MP Tarus, something that attracted reaction from the congregants who booed and asked him to get out of the podium.