By Jackiekibet (self meida writer) | 9 days 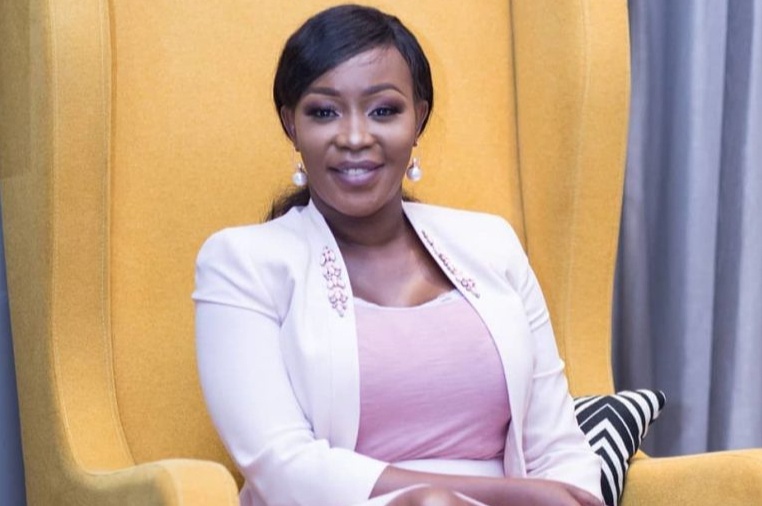 Former Citizen TV news anchor Terryanne Chebet is having a rough day after she exposed a man who has been shooting his shots on her DM. Sharing the screenshots, Terryanne revealed that she was about to go on a ainterview with he guy after he asked for a job offer but changed her mind after going theorugh the earler messages he had been sending confessing of his love for her.

Kenyans are so mad at Terryanne’s action and called on her to stop pretending as others accused her of having slep with every man at Royalmedia. 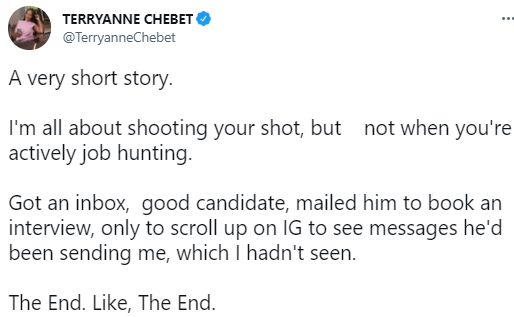 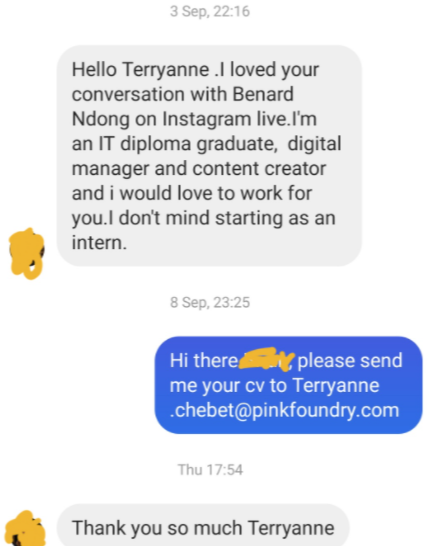 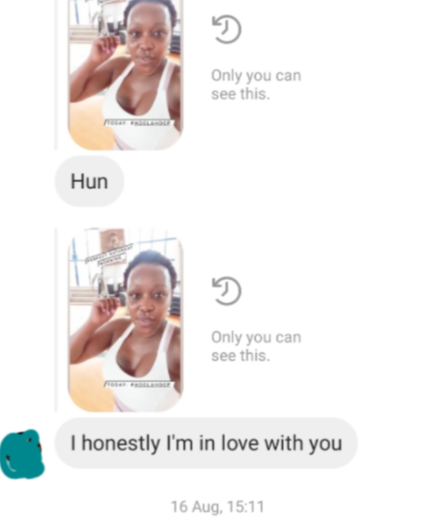 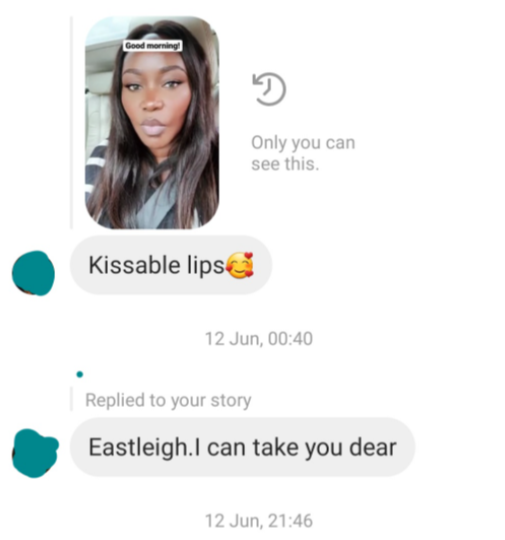 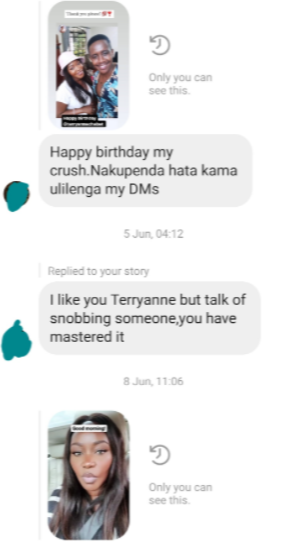 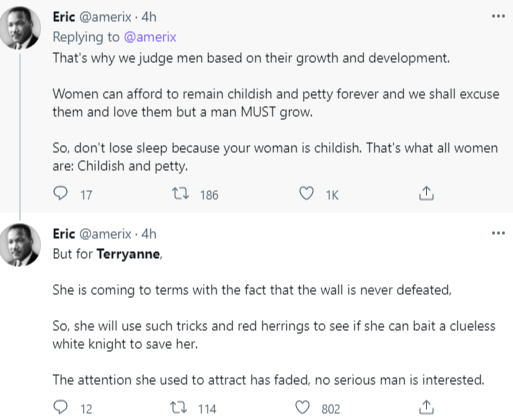 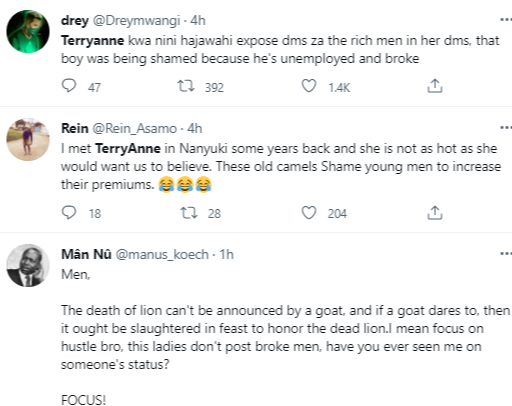 Terryanne ws unceremoniously fired from Citizen TV, a scenario that left her traumatized that she even got a tattoo inked on her wrist to mark the experience.

“Inked this in Nov 2016. My 3rd one. Marked new beginnings after I lost my job. An arrow with a lotus flower that got edited out because I was actually showing you my nails which I love… (It’s on my IG stories though) Would you ink if you haven’t? What would it be? Would it have a meaning?” Terryanne Chebet wrote alongside a picture of her tattoo.

In a past interview with Grace Msalame, Terryanne who was fired from her post in 2016 described that period as one of the lowest and most difficult moments in her journalism career. According to her, she was caught by surprise with the layoff as she was not underperforming in her job.

“It was very hard in the beginning, just hearing the news crasher me because it is one thing when you lose your job but it’s another thing when you lose your job so publicly and such a public job. So even when there was an announcement that there will be redundancy, I never imagined it could be me. So when it happened I did not know what to do. I called my friend and I was crying, then I went home, locked myself in a room,” she explained during the NTV interview. 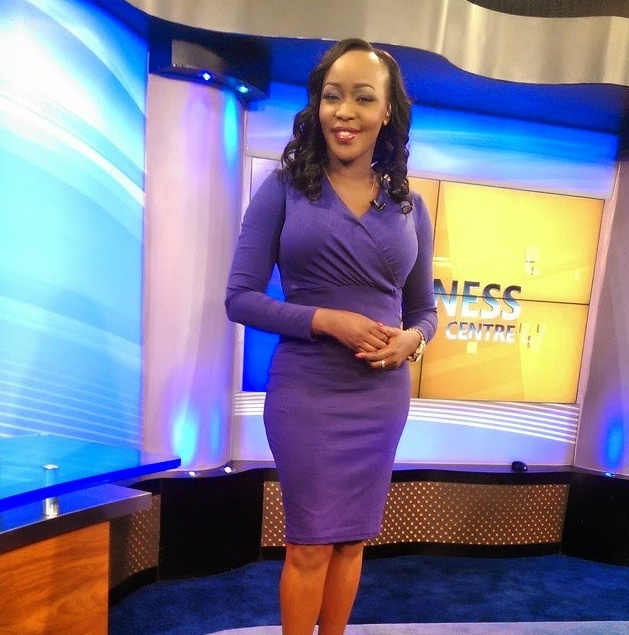 Terryanne is a single mother but that does not stop her from involving her baby daddy in their children's lives. She learned that the hard way after feeling that at some point her teenage daughter did not love her.

Speaking about it during an interview with Massawe, Terryanne shared saying,

"When my daughter turned 11 years, I used to feel like she hated me. She was completely different. I realized that I needed her dad more in her life than ever before. That is exactly what I did."

Terryanne added that she made her daughter comfortable with her dad’s family.

"I think the more people you have in life, godmother and aunts. Girls need as many influencers around them as a teenager. That is what exactly I did by involving his family side to feel she is in a family so she knows that if she lets me down, she lets everyone down.

Talking to her as much as possible and now she is very comfortable with me. She is turning 15 years and it is not easy, as the mother you have to keep talking to her. She should make her comfortable to talk to you." 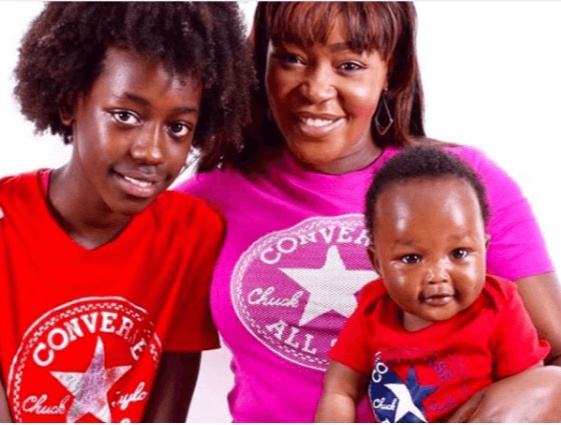 Terryanne explained how the relationship between her and media personality Jackie Maribe fell apart.

In an interview on a local radio station, Chebet explained that a lot of untrue sentiments were peddled around at the time when Maribe's hearing in a murder case was on going.

Chebet indicated that they started drifting apart after rumors circulated that the friends were not there for her when she needed them the most.

"During that period a lot of things were said that were not true about the kind of support she received and the friends that she had. The truth is that we visited her at Lang'ata Women's prison and were also there in court. The wider circle that supported her know that we were there for her," Chebet stated.

Chebet acknowledged that friendships do sometimes go through tough situations that cause a rift between those involved.

"Jacque is my best friend and she will always be. However, right now, she and I have given each other time but I know that at some point, our friendship will blossom again," she added.

Maribe narrated that most of her female friends abandoned her in 2018 after she was involved in a highly publicised murder case.

"People I thought I was very close to. I even heard that some did public statements, disassociating themselves from me. People we were seen on holiday with. Being told we're squad goals and things like that.

"I will be very honest with you, I have like two female friends to date who stood by me from the beginning," Maribe stated.

Terryanne disclosed that she keeps her love life private to protect the people she is dating, while avoiding bad energy and uninvited judgments.

Ms Chebet pointed out that she vowed to keep her love life away from the public eye to avoid unnecessary criticism and bad energy. She added that keeping her dating life private gives her peace.

“I believe there is a reason why personal is called actually called personal and there are things that are your personal life that should remain that way. And if you put too much out there, it invites criticism and bad energy. So as for me I said I will protect my dating life, I will protect the people I date because they are not public personalities. So I would rather keep that part of my life, as private as possible because it gives me peace. And nobody really needs to know until when I probably walk down the aisle and then they can know or I can still choose to keep it private. Personal has to be personal,” said Ms Chebet.

From the scenarios of part of her life, Chebet is not perfect and should stop blaming the secret admirer for shooting his shot.

"People Call us Witch, No One Wants to Marry us Because of Our Strange Condition" Lady Painfully Says