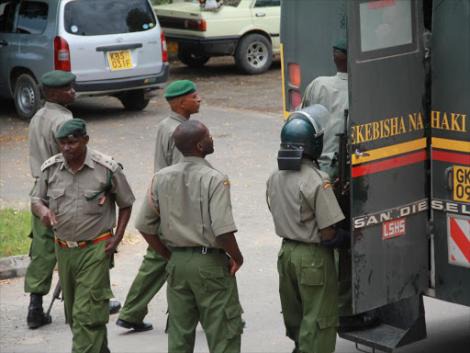 American novelist and New York Times bestselling author Jessica Sorensen once said: Seize the day, take hold of it and make it whatever you want.

This seems true for the 42-year-old prisoner who sought to make the most out of his time at Kaloleni GK prison in Kilifi County. Mutinda Mwai enjoys celebrity status in jail due to his notable reporting skills.

He is celebrated by his peers and bosses for his outstanding prowess in informing other prisoners of the happenings both inside and outside the prison.

The convict utilizes his free time showcasing his reporting skills to other inmates, who follow his words.

During an interview with a local media outlet, Mwai seized an opportunity to show off his skills to his boss, Chief Inspector Paul Kaburu who is the police officer in charge of the correctional facility.

"First and foremost, I laud you for interviewing me as your guest. Second to our viewers, take heed that those who are in prison can also reform their lives," Kaburu stated.

The officer added that Mwai is among many convicts who have shown tremendous progress during their time in prison. In the case of Mwai, he admitted impersonating a police officer. He has currently served one year and two months of his three-year sentence.

"When I came to prison, the police officers granted me access to various services. Further, through having numerous chats with my colleagues, they branded me as a news anchor for my impeccable skills," Mwai stated.

He noted that he looks up to former KTN News Investigative Reporter and current Nyali MP Mohammed Ali alias Jicho Pevu for his anchoring skills.

Born in Kwale County, the prisoner schooled in Shimba hills secondary school then moved to Mwavumbo secondary school.In school, he aspired to be a lawyer but found himself training in clearing and forwarding.

In prison, however, he trains as a paralegal where he writes submissions and defense for fellow inmates. Further, Mwai is synonymous with dressing his colleagues by making the black and white striped outfit.

Mwai urged Kenyans of goodwill to stand with him and help him grow his talent as he prepares to serve the remaining part of his sentence.

"If by God's grace, Kenyans of goodwill are endeared by my talent, they can offer to help as soon as I get out so that I can earn a living through my craft," a teary Mwai told the media.

"They Broke My Two Fingers" Spy Queen, Jane Mugo Breaks The Silence and Reveals How She Was Beaten

Ways On How To Stop Smoking.

One thing you should never do while driving Automatic car.

7 Things No Mother Should ever Feel Ashamed of