At today's Kenya Kwanza's Nyandarua Economic Bloc Forum, a Nyandarua Small Scale Trader who is locally known as Mama Mboga whipped the gathering into a frenzy when she responded to DP Ruto's pick of a male running mate.

At the meeting, the individual who introduced herself as Mama Mboga and was later identified as Mary Njoki Gitau posed a challenge to the attendees by asking why anyone would choose to vote for a female running mate rather than a male running mate. She stated that even in the account of creation, there is no indication that God had any women working for him in any capacity. 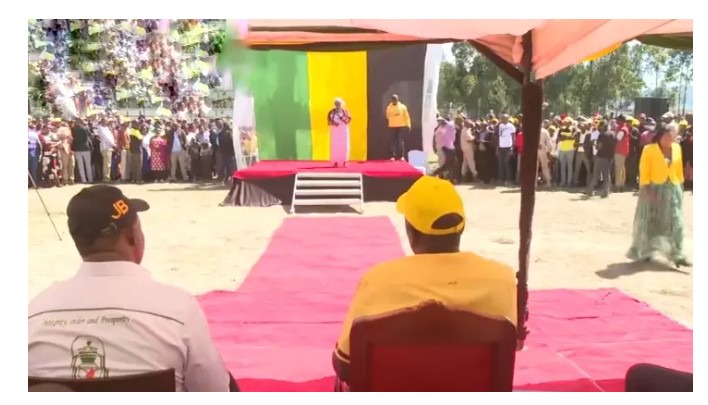 Mrs. Mary Njoki claimed that the woman who was chosen to be a running mate does not attend church, and as a result, Mrs. Njoki is unable to vote for the woman.

"Huyu mwanamke tunaambiwa tumfuate hajawaienda kanisa. (That woman who we are instructed to follow has never set foot inside a church.) ata siku alienda hakuwa comfy. Even on the day that she left, she could not find any comfort), "Njoki asserted this in response to the excited crowd's clapping.

"Kuna mtu anasema Ruto ni mwizi, ati Gachagua pia ni mwizi. Huyo mtu anasema hivo ni Junet.. Someone is saying that Ruto is a thief, and that Gachagua is also a thief. This is referred to as "Akisema Hivo Tena Tutaenda Kumuonyesha Akina Mama wa Nyandarua Wamekataa Ruto Kutusiwa Tena." Junet is the name of that individual. If he continues to abuse Ruto in this manner, we will go to the women of Nyandarua and show them that they have made a decision that Ruto cannot be insulted ever again "— I quote her.

How Francis Atwoli's Constituency Voted in The Presidential Race