"Vioja Mahakamani" actor dies after being hit by a car.

The famous vioja Mahakamani show that has been doing everything within its power to ensure that we are not only entertained but also thrilled is today mourning .Today all is not well with this amazing television show as they have just lost a very important member of the show to a nasty road accident.One actor by the name Tobby who majorly played the role of a court corporal did not live to cast his vote today as his life was cut short by a car which hit him from behind as he walked home. 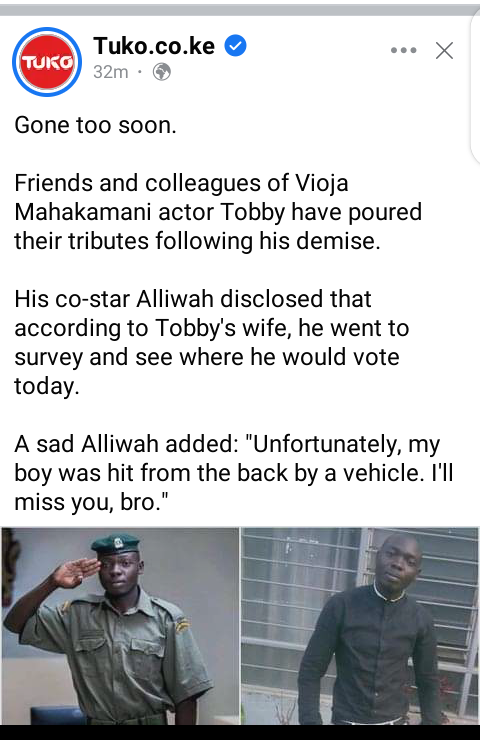 His brother says that Tobby was going home in the evening as he also prepared to cast his vote only for a speeding car to hit the actor from behind severely such that when he was taken to Nairobi hospital he had breathed his last before the doctors could attend to him.His friends and fellow actors from the amazing show which is always aired in Kenya broadcast cooperation have expressed their sincere condolences for the dead actor.They describe Tobby has a cheerful actor who always made them smile regularly and that his death had left in them a gap that will take a very long time to be filled.

The body of the late actor has been taken to City mortuary for further post-moterm as police department continue with their further investigations on what might have led to the loss of that young cheerful actor.KBC and other Royal media stations who had interacted with the late actor have also sent their condolences to the actor's family wishing them peace as they mourn their beloved one.

One Party? What President Ruto and Moses Kuria Allegedly Intend To Do

Political Destiny Of Azimio as Kalonzo Allegedly Taking Over