'Drama As Man Is Sentenced After Being Busted Forcing Himself On a Girl in Kisumu, Homabay

By CrimeBuster (self media writer) | 9 days ago

A Tanzanian man has been scented to 15 years in jail by a homabay based judge following an incident that happened a few years ago after he allegedly Tricked and forced himself on a girl.

According to the reports given by Citizen tv, it has been revealed that the suspect allegedly Tricked the victim after which he forced himself on her for several days after which he threatened her.

However, she later went and revealed what had happened Forcing his family members to report the incident to the police station for more investigation and questioning. The suspect was arrested and taken to court where he was Sentenced.

Reports have revealed that the suspect was charged in two separate occasions one being that he allegedly came into the country despite the fact that he didn't have the right papers or in simple terms, had sneaked into the country by unlawful means.

He was also charged with Defilement cases after which the judge revealed that the suspect was going to be allowed to go back in his country after completing his jail term in Kenya.

This is happening at the same time when the government has revealed that the rate of early teenage pregnancy has increased dramatically over the past few months.

According to the reports given by the government in conduction with the ministry of education through the Cabinet secretary of education proffessor George Magoha, he revealed that the rate at which Alot of girls are dropping out of school is alarming.

Due to this reason, Magoha has urged all chiefs to make sure they work hand in hand with the families of these victims in order to facilitate the process of arresting the suspects who are currently Roaming free after taking advantage and Impregnating young school girls in the country. 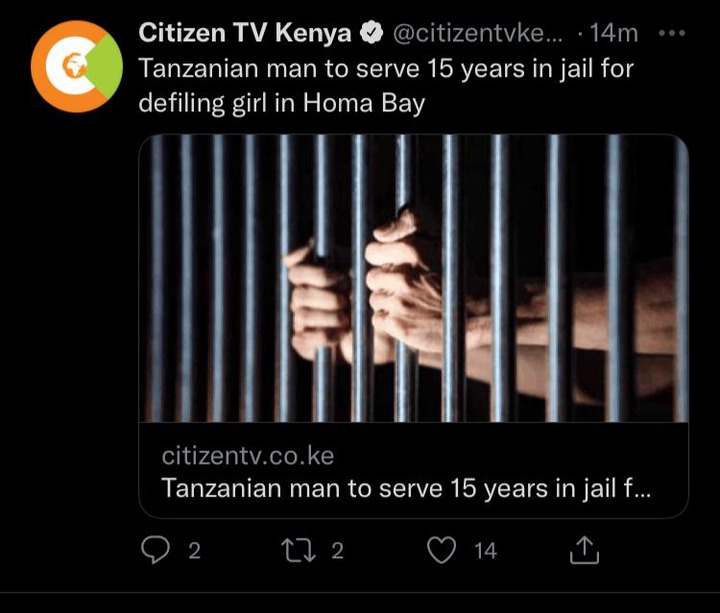