By paulongoro (self media writer) | 7 months ago 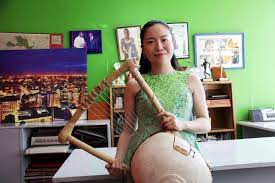 Mukoyama’s passion for music commenced when she was in high school. As a result, she founded her band named "Taika," where she served as a vocalist and the band leader. She tried twice going to the USA, New York, to perfect her passion for music. Unfortunately, her ambitions were thwarted by the 2001 September 11 Attacks and a short phase (March-April, 2003) of war between the USA and Iraq.

As Bennett T. Roy once said, “Do not fear failure but rather fear not trying.” Mukoyama never gave up. While still in Japan, she attended a Music Concert in Tokyo and discovered Kenyan traditional music from the Giriama community.

In 2004, she came to Kenya to learn music. She first encountered Nyatiti at Bomas of Kenya. The instrument grabbed her attention. Mukoyama said, “I was interested in the instrument was enthralling and producing a nice sound.” Mukoyama gave try in learning Nyatiti.

Around March 2005, she commenced acquiring skills in Nyatiti in Nairobi. Regrettably, her learning progress was not convincing. For this reason, she inquired where she could learn Nyatiti perfectly. She was told the master of Nyatiti was in Siaya County, a place called Alego Karapul.

In May 2005, she boarded the Akamba bus to Siaya County. When at Alego Karapul, she approached the master of Nyatiti (Okumu K’Orengo). However, the master declined her request to learn Nyatiti several times based on Luo's customs about Nyatiti. Women were not allowed to play Nyatiti.

Mukoyama’s persistence in learning to play Nyatiti overwhelmed Okumu K’Orengo. As a result, he accepted Mukoyama to stay with them as she learned to play Nyatiti. Around July 2005, Mukoyama commenced her learning.

Mr. Okumu K’Orengo named her Anyango, a famous Luo name for females, meaning a female person born between 10:00 am to noon. Mukoyama learned Dholuo, and then Kiswahili. She progressed well in her training, and on November 26, 2005, her mastery of playing Nyatiti was tested. She officially finished learning to play Nyatiti in 2006 and went back to Japan.

During her interview on August 30, 2006, on Power Breakfast on Citizen TV, Mukoyama stated that she had released six albums in Japan and one album in Kenyan. At the same time, she mentioned that her master (Okumu K’Orengo) died five years ago, implying Mr. K’Orengo died around 2011. However, when she comes to Kenya, she visits the family of Okumu K’Orengo.

Mukoyama speaks four languages: Japanese, Dholuo, Kiswahili, and English. This is how Eriko Mukyama became the first female Luo-Japanese Nyatiti player. Furthermore, her story manifests passion, determination, and persistence. Through her tenacity, the Luo custom that women cannot play Nyatiti is now a thing of the past. Presently, there are Luo female musicians who have adopted the use of Nyatiti in their band. The superstar Suzzana Owiyo is one of such Luo female musicians.

Content created and supplied by: paulongoro (via Opera News )