Ex- Capital Fm radio host Mandi Sarro alias Miss Mandi has been put in the spotlight with a section of KOT" Kenyans On Twitter" social media fans for allegedly bullying and discriminating against fellow colleagues at work. 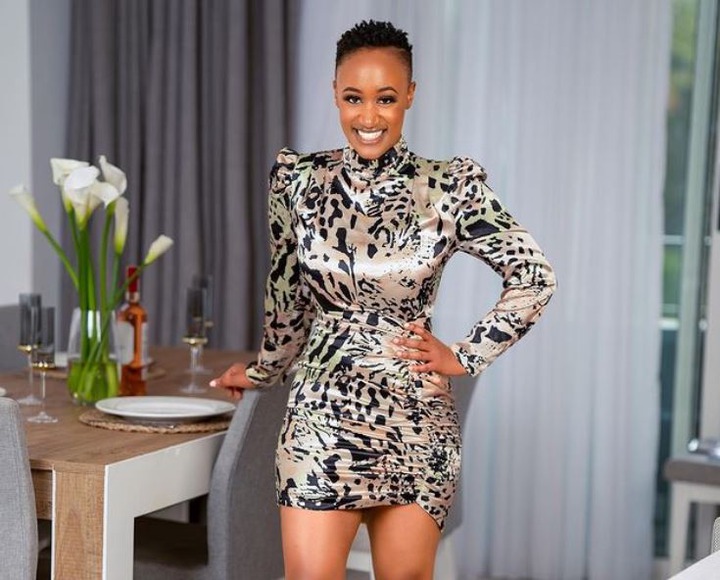 This came after her ex-colleague identified as Koome Gitobu revealed What the presenter did to him years when they were working at the station, Gitobu would then quickly quote her with a thread of bullying allegations before KOT joined in with more receipts.

A tweet about ‘accountability’ saw Miss Mandi take over the trends on Twitter after her former colleague put her on blast.

In her tweet, she wrote: “I truly dislike people who aren’t big on accountability. You can’t go around doing things that hurt people then are afraid to be accountable for your actions. You’re stunting your own growth.” 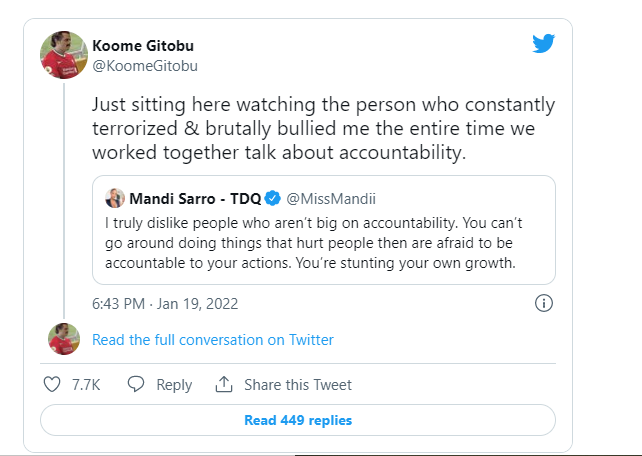 Miss Mandi tormented, discriminated, and called him names for not fitting into her 'class,' according to screenshots that  Koome Gitobu shared on social media.

Apparently, Mandi who previously worked as a radio host is accused of trolling Gitobu for his clothes, accent, and sometimes food and made bullish nicknames behind his back during his time at the radio station.

“Just sitting here watching the person who constantly terrorized and brutally bullied me the entire time we worked together to talk about accountability,” he tweeted.

Further, Gitobu accused Mandi of constantly trying to sabotage his media career, however, he says he still remained in the industry and they have crossed paths again even after leaving the radio job.

A number of times Mandi also reminded him that he wasn't fit for a radio job since he wasn't as fluent as her.

Some reactions from KOT 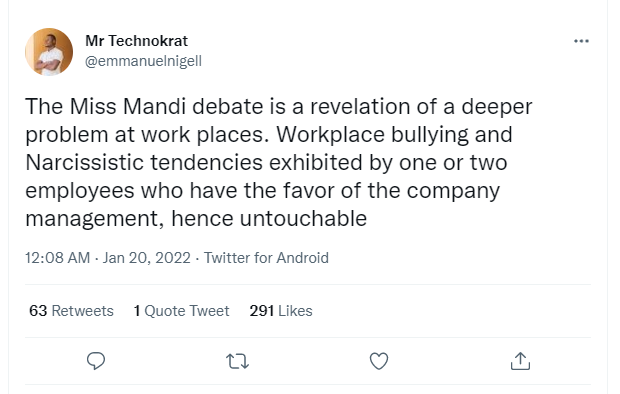 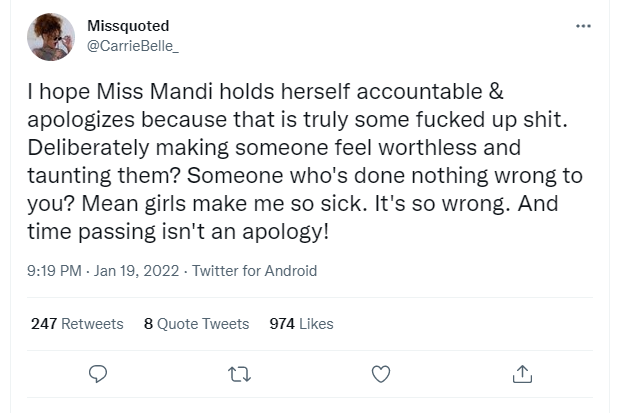 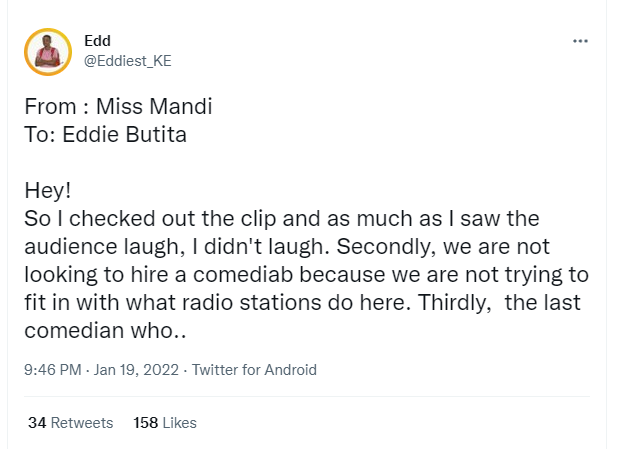 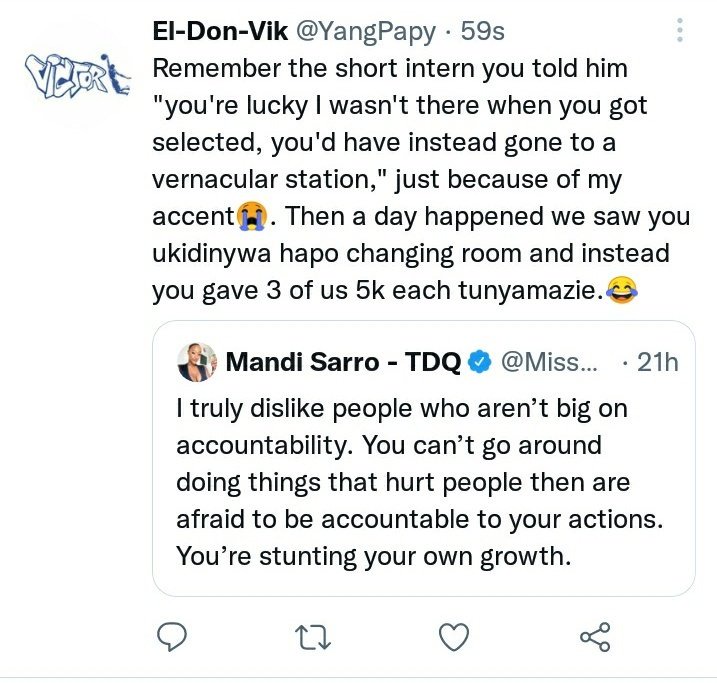 This woman. Felt because I didn’t have an accent as well-polished as hers I, therefore, was not deserving to be a radio presenter like her. And would happily remind me whenever I crossed her (which only happened when I breathed near her) " He noted.

“This woman would constantly call the entire office to a stop to make fun of my clothes when I didn’t have enough money to buy the trendy shit she & her friends thought only those deserving to be in their presence to wear,” Gitobu wrote.

"She also made up such hurtful nicknames for me behind my back. And laugh in my face because I couldn’t afford to order fancy food for lunch so I would cook my own food and carry.” Gitobu added.

Further slander ensued after a past publication was retrieved where Mandi is accused of physically assaulting media personality Anita Nderu. 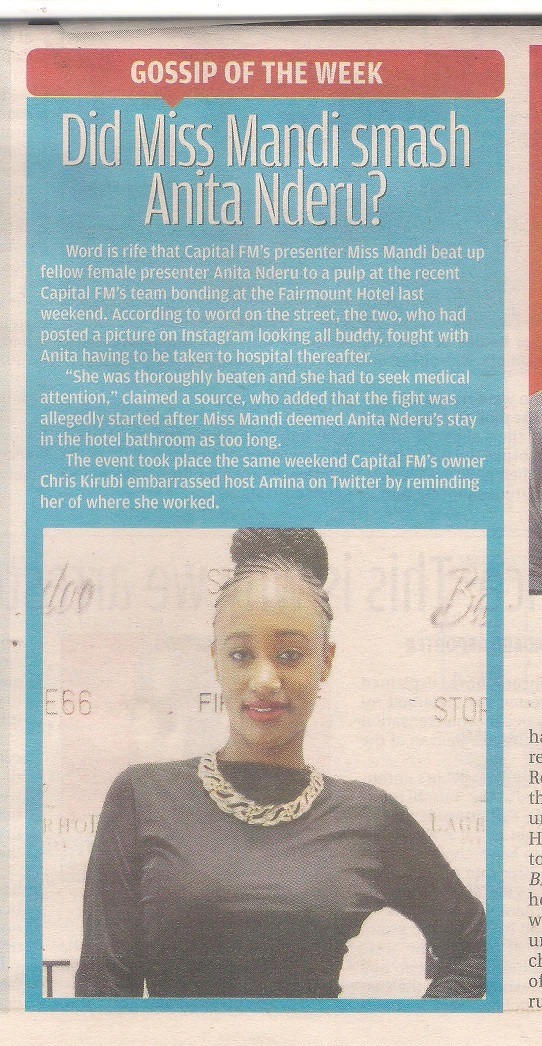 Another user unearthed a tweet from 2015 by comedian Butita where Mandi left a savage response to him, At the time, Butita had sent applications for a radio job at Capital FM. “Three years down the line, Respect and humility will get us there. Believe in yourself,” Butita tweeted. 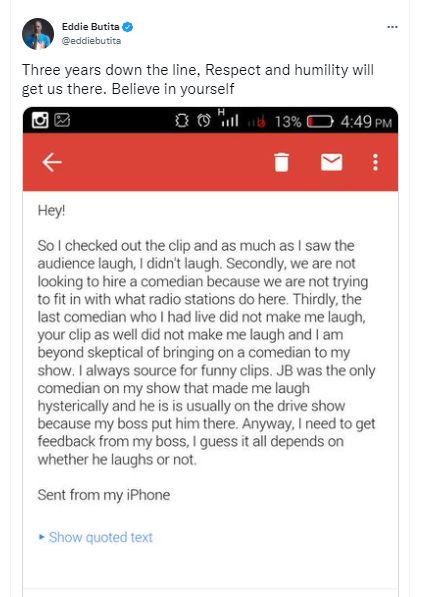 Media personality extraordinaire Mandi Sarro, popularly known as Miss Mandi went on a rant under an anonymous post intimating she hates men that dress like women in the name of comedy.

The outspoken media personality subliminally called out the likes of Flaqo, Crazy Kennar, Eric Omondi, and other male entertainers that practice the same.“When will male comedians leave the trope of creating content dressing as women?” she erupted in a comment on Instagram seen by SDE.

“Anyway, one thing that’s for sure, taking money to push agendas doesn’t do anything to the broken systems that will continue to affect all of us. Bad leaders prefer we remain in this vicious poverty cycle,” she wrote.

Beneath the post she screenshot, she added “And I’m def not amplifying this foolery.”

Mandii is known for hosting a late-night radio show, and creating digital stories through travel and food - but is also notorious for her prowess on Twitter and Instagram. 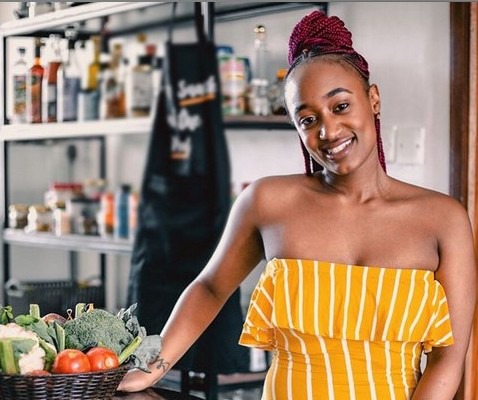 Mandi is however yet to respond to any of the allegations and her comment section under the initial tweet remains disabled, by the time the publication was made

What Was Spotted When Raila Was Casting His Vote In Kibra