'' Hang On There, This is My Show,'' Wahiga Mwaura Rudely Interrupts Rigathi Gachagua

By Kablathago (self meida writer) | 9 days 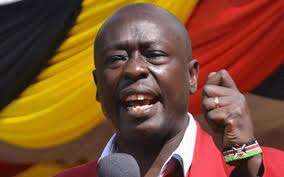 Rigathi Gachagua and Jeremiah Kioni are appearing in citizen TV to look at the state of the nation. However Wahiga Mwaura far from his most of his shows where he is cool abruptly interrupted Rigathi Gachagua warning him to hang on for it was his show.

Rigathi was interrupted by Wahiga Mwaura after he continued to speak without following his time lines. It's something that shocked Rigathi as it was unexpected but again since it was actually Wahiga's show he had nothing to say about it.

Wahiga Mwaura however has continued with the show well without taking any offense in his words. It's a matter that though shocked most of the views as it's unclear if Wahiga Mwaura can be that rude.

It's clear however that Wahiga Mwaura shows cannot succeed without the politicians and viewers. It's clear it's a show for everybody and not a selected few but again it's a matter that has shocked many due to the brutal rude nature in which the message was delivered.