By Shaffyroonakenya (self media writer) | 1 year ago 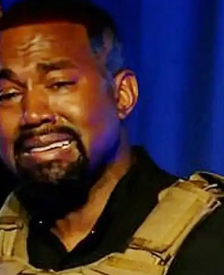 Kim Kardashian and Kanye West met in the mid 2000s while in the entertainment industry. The bond of their friendship grew stronger hence deciding to start dating which resulted into their marriage.

The two have had a lot to enjoy in their relationship including their massive wealth they have made together in their businesses and entertainment industry. It is believed that the two are one of the most successful people in the music industry having won several awards and also owning a music recording lebble. Kanye Omari West was one of the people who vied for presidency in the United States of America but failed.

On 19th February, a court clerk for Los Angeles Superior court confirmed to CNN that Kim Kardashian has filed a case involving a divorce on his husband Kanye West. According to reports, Kim Kardashian has been living with her kids all a lone while her husband was living a bit distance from his family something that got his wife tired.

Although the case is yet to be rulled out on whether the divorce can go on or Kanye West can still have a smile on his face.If Kim Kardashian pens down on the divorce paper, then it will be official that the two love birds will have parted ways.

Content created and supplied by: Shaffyroonakenya (via Opera News )