Zora Series: Yola Labeled Chairlady of Gold Diggers Association After She Said This To Kwame

Zora series is a drama series which airs on Citizen TV and it has been there for close to one year now. It's a story series of a young mother of one son who was married to a man called Fella.

The marriage between Zora and Fella hit the rocks and Zora moved out of their house. He was abusive, chronic drunkard and serial cheater. When Zora could take it no more, she moved out but Fella has been adamant to give her divorce.

On the recent development of the series, Zora has fallen in love with Madiba, son to a rich politician called Oliver Chibale.

Madiba has a young brother named Kwame who is married to a lady called Yola.

To make matters complicated, Yola had a crush on Madiba before she was married to Kwame and upto today, she had some reserved feelings towards Madiba.

Now, that is the house where Madiba grew up, married and sired two daughters, Lila and Fila but they were all chased out.

This came as a shock to His younger brother, Kwame who has all along regarded Madiba as a brother and knew nothing about different biological fathers. When Kwame questioned his mother and aunt Loreta, he received no answers.

His wife, Yola however had different perceptions. As the others were digesting what was happening to Madiba, Yola was rejoicing internally and she outwardly told Kwame that he is now officially the legal heir of Madiba's property.

This statement proved that Yola is focused on wealth since she is Kwame's legally married wife.

On instagram, Jiffypicturesfans on their account observed Yola's comments and labeled her as 'chairlady' of gold diggers association. 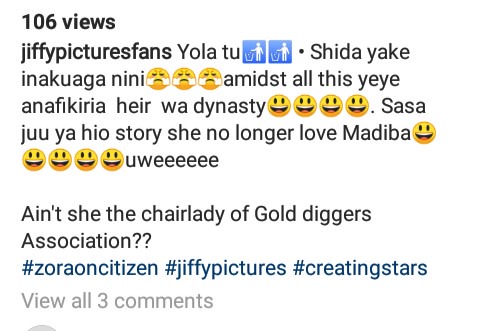