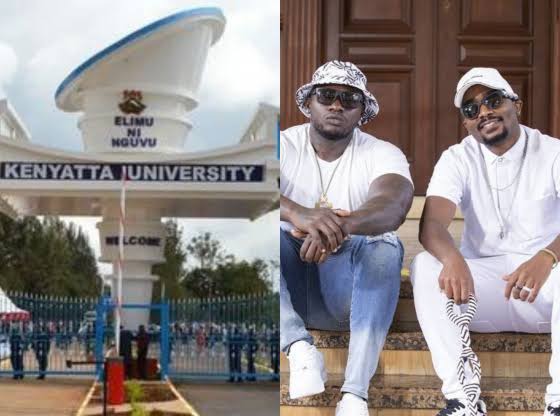 Ndovu Kuu hitmaker Krispah has finally spoken hours after his song featuring rapper Khaligraph Jones and Boutross was pulled down from youtube after gaining 3.5 million views over copyright issues.

Copyright allegations were brought forward by an upcoming artist- Dexta Briyanka who claimed that the trio sampled his beats and his move was to protect his rights which he claimed had been infringed.

He further claimed that the song promoted violence in Kenyatta University where parents had borrowed the narrative driven by the song that ‘there is no learning at the varsity.

His sentiments according to Krispah were bought by Kenyatta University whom he believes had a part in the YouTube's decision to delete the song from its platform.

Responding to the allegation, Krispah has blamed the institution for adding into his tribulations after he refused to collaborate with the institution choir to perform for free in the coming graduation ceremony this Friday to mitigate the effect of the song. 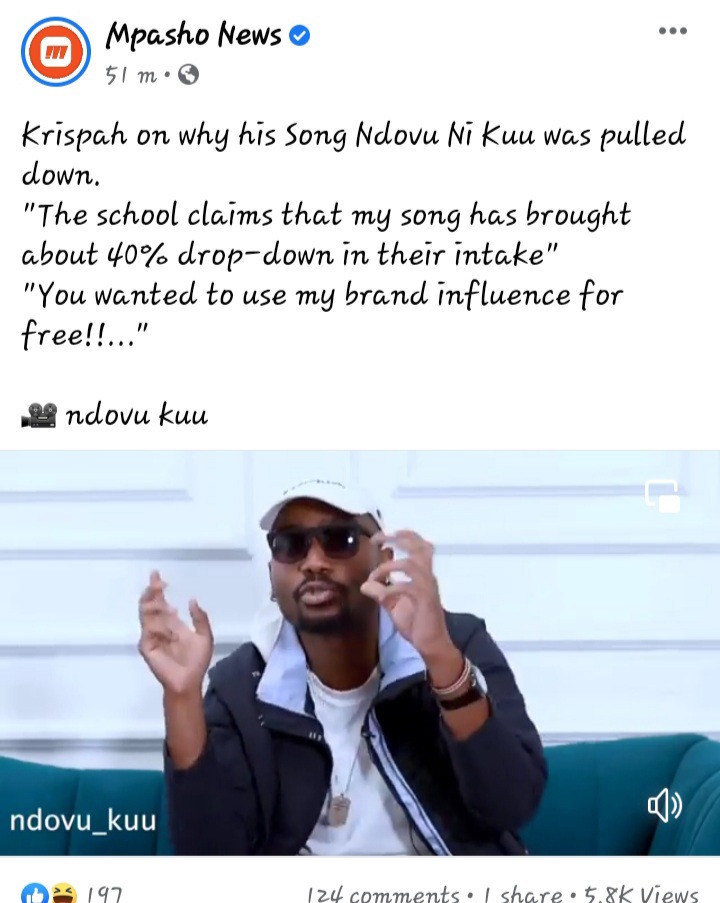 According to Koinange, the song as a negative effective to the institution and only way for him to clean the name of the institution was to perform at the graduation ceremony.

Kenyatta University which has not officially given a public statement on the same, allegedly through its communication officer Koinange said that the lyrics of the song that says there is no learning at KU has caused a 40% drop in the school enrolment matrix.

Some parts of the lyrics On the song, he raps:

Which loosely translate to:

“…If my kid is called to KU I won’t accept it, there’s no education at KU I can’t accept it, You’ll take them for First Year introduction, two weeks later they’ll already know reproduction…”

He took it as an opportunity to make some money and sent them a quotation of cost implication of around Ksh 950,000 for him to perform at the graduation ceremony something the institution allegedly said it could not pay for the damages he had caused.

Through an email, the university official vehemently rejected his the propossl maintaining their stance that the institution was a victim of defamation. 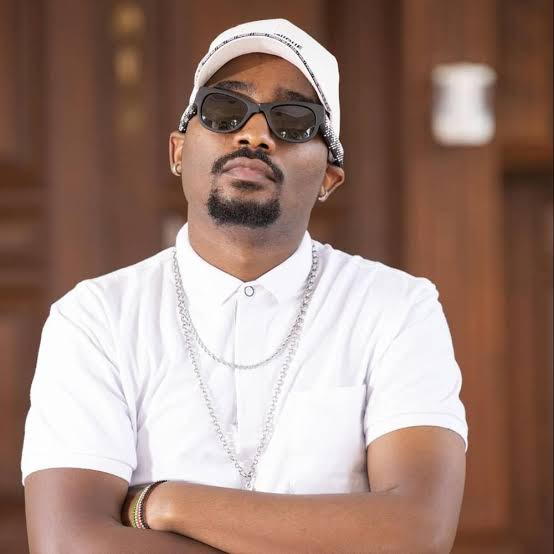 “As I explained, your song that has been playing on the airwaves and on social media has lyrics that defame KU and states inter alia that “Hakuna Masomo KU”. As I explained, your story was a personal experience, the lyrics damage the reputation of the institution and discourage parents from sending their children here.

” In addition, you have financially benefitted from the lyrics of the song whose major take-away on social media has been that there is no education going on in KU. I reached out to you as an artist and requested that you conduct a CSR to mitigate the negative impact of the song to our reputation,” Koinange’s email allegedly read in part.

Krispah further said that his choice of words especially the term "KU" is an ambiguous word and that the acronym can mean a lot.

The acronym "KU" to Krispah and his management alluded that it can either mean Kula Ulale, Kula Kuala, Kabianga University, Karatina University and other names. 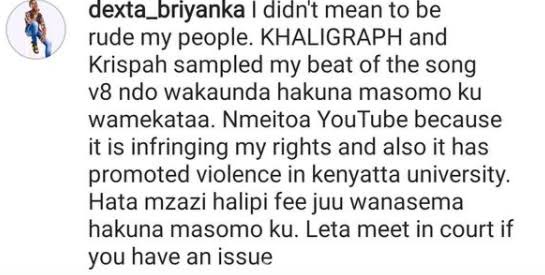 Photo: Dexta allegations that saw the song pulled down.

Krispah further went ahead to say that the songs beats and the beats for V8 song does not come even a near to resemblance.

Ndovu Kuu management has brushed off the claims and said that they will not allow an institution and other people who are fighting them to bring them down.

The management has alluded that they will take the matter to the court to revert the decision made by YouTube.