'My Dream Has Always Been To Make Drugs' Ferdinand Omanyala Narrates

By Ckibiba (self media writer) | 23 days ago 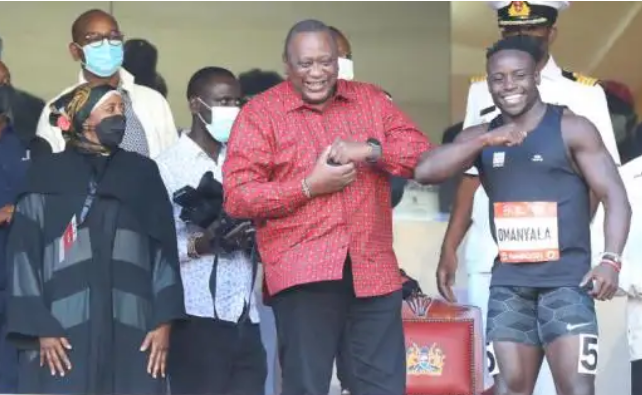 However, with his recent newfound fame, he seems to be frequently hitting the headlines for eyebrow-raising statements, and it’s unclear whether he means it, or is in the process of creating a brand.

Omanyala was making an appearance on Citizen TV’s weekly popular show Jeff Koinange Live, which is hosted by Jeff Koinange himself.

During the show in which he appeared with his wife Lavender who joined him later, he shared with Jeff Koinange that he studied a Chemistry related course at the University of Nairobi.

At the tail end of the show, when Jeff asked him if he still had any desire to do something that is related to the course which took him to the university, Omanyala dropped the bomb.

He said that his lifelong ambition has always been to make drugs. This caused a hearty chortle, not just from Jeff who was amused as well as surprised, but from his wife too who joined in on the laugh.

Apart from his dreams of drug-making, Omanyala also shared about his days at the university, expressing gratitude to the institution for what he said, was introducing him to the first serious athletics training sessions.

He remembered, humorously, how, the very first time he went for training on the track, they were informed that 100m training isn’t trained on a 100m stretch but 300m.

Feeling energetic and psyched up, he ran the 300m with all the strength he had. He made a dash for it as if it was an actual race and not a simple training session.

Then they were told they would be doing another 300m, and after that one they went for another, and another. In total, they did 12 rounds. By the time they were done, he was gasping for air.