By Nacera (self media writer) | 1 year ago

Over the weekend, the Sauti Sol boys posted a photo of themselves with their significant others- a fiance for Bien Aime, a girlfriend for Savara, a heavily pregnant wife for Polycarp....and a Caucasian guy beside Chimano.

It was the mzungu guy's presence in the photo that caused a social media storm as once again Kenyans tasked themselves in finding out of Chimano (the guy with the best voice in the band if my opinion carries any weight) was fielding for the other team.

By fielding, I mean if he was interested in men. 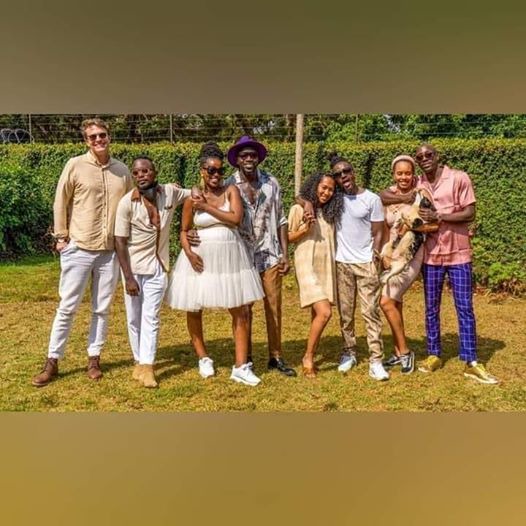 This photo of Sol members and their significant others made rounds on several Kenyan social media pages. Photo: Sauti Sol.

For what feels like eons, fans publicly wondered if this shorty guy with a quirky fashion sense and a powerful voice that could probably crumble mountains was gay. Chimano during a past vacation trip to Lamu. Photo: Instagram.com/iamchimano.

While it is not evident that he ever came out to confirm or deny the rumors, Sol mate Bien-Aime went on record in past reports saying Chimano was not gay.

He even quickly gathered and read the riot act to a couple of females who posted homophobic comments underneath a Sauti Sol photo that showed Chimano wearing black nail polish.

Once, however, Chimano was quoted saying he had nothing against gay people as they were human beings too.

Out on a lunch date with friends. Photo: Instagram.com/iamchimano.

Curious about his answer, this writer went over to his Instagram and in this article are some pictures dug up of him and the mzungu guy looking cozy as they went about life. Photos date back to last year.

Chimano's sexual identity always comes into question whenever the band releases new music or post any photos on their socials.

In many instances, Chimano tends to be dressed in a way that is stereotyped to gay people.

To closed-minded people, such outfits include vests that over-expose the chest area, tight jeans, short shorts, nail polish, kimonos, flowery shirts and tights among others that Chimano has been photographed in severally.

Well, here's to live and let live- and to each, their own happiness.

Content created and supplied by: Nacera (via Opera News )