"I am single but not ready to mingle" Maria Told Jalang'o In His Youtube Channel.(Video)

Yasmin Said popularly knowns as Maria, has been one of sensational actress who acts as the lead actress in one of the popular tv show 'Maria' that is aired in citizen tv as from Monday to Friday at 07:30pm and va repeat on Saturday at 04:30pm. Jalang'o hosted Maria in his youtube channel dumbed Jalang'o Tv that is aired in youtube. Jalang'o had an interactive interview with Maria where she narrated her journey in acting. 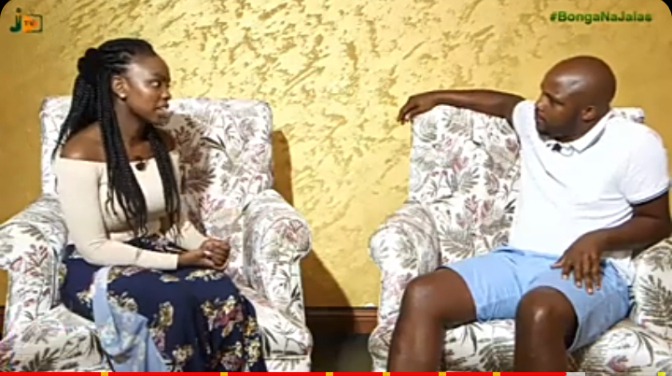 Maria who is 20 years old now told Jalang'o that at the start if her journey in acting started just a moment after she finished her high school studies where she was in Ribe high school in Kilifi county. Maria said that she never acted in high school since she was never in drama club in high but when she saw posters for drama audition she decided to try hee luck. Maria went for the audition and later after a few days she was called and given a lead role as 'Maria' to act as the Getto girl.

However , Maria told Jalang'o that she has never lived such a life before despite being raised in Getto. She said that acting for the first time was so tiresome, challenging and hectic but she tried her best and come out as the best. Maria told Jalang'o that in to he first days of her show to appear in tv waa so excited to see herself there, and no one in her family apart from her mother knew about it but she mobilized her family members and right now are the biggest fans to her.

Yasmin Said won the lead actress award in Akalasha awards and she was proud of her fans support. She told Jalang'o thay she finds it difficult when she is out there and the kids notices her presence. The show is most loved by youth, kids and even adults. Jalang'o asked Maria about her love life but she said that she is single and not ready for any relationship right now. She said that she has got mich endorsement from big companies and she is proud of what God has done to her at the age of 20 years old. Maria thanked her fans and far most her producers and her family for the biggest support they have given her. She also encouraged other young youths to be optimistic in whatever they are trying to do and God will see them through.

How To Instantly Appear More Interesting To Women

Lee Kinyanjui Regrets Over His 'Reckless' Remarks Towards Kiambaa MP