Congratulations to Lil Nas X.Lil The famous rapper is now the proud parent of a whole album as his first record Montero dropped on Friday.The rapper marked the occasion with a brilliant video of the moment he ‘gave birth’ to Montero having gone into labour on Thursday night. 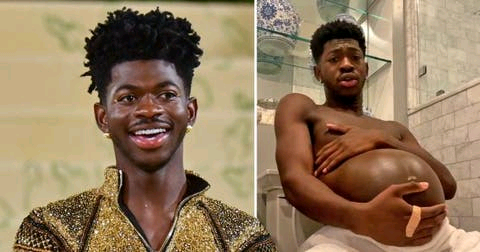 The Panini star announced his ‘pregnancy’ in a special photoshoot with People earlier in September.In the clip, Lil Nas is wheeled in to hospital in tears by two doctors who safely deliver him of a brand new album. Congrats!

The rapper says that his new album is already Grammy nominated.Lil Nas X, who triumphed at the MTV Video Music Awards days earlier with Call Me By Your Name, collaborates with a whole host of stars on his album including Sir Elton John, Megan Thee Stallion and Miley Cyrus.

Prior to the launch of his first album, Lil Nas X was seen making his mark on the red carpet at this year’s Met Gala held in New York.The theme was American Independence and Lil Nas X went all out with his red carpet look that featured multiple layers including a gold suit of armour underneath a huge regal cape.Sharing snaps of his red carpet moment to social media, he confessed that he was having a good moment with Reese Witherspoon giving her seal of approval and Donatella Versace describing his look as ‘ABSOLUTELY DIVINE.

Have You Seen This Man? If You See Him Or Knows His Whereabouts Report To DCI Or To Police Station