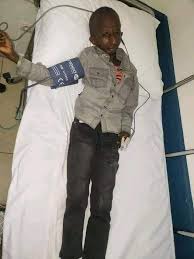 The French musician Grand P is known to many for having an Ivorian curvy woman. The woman is also a socialite who was trending for the past two weeks after reports had circulated online that she had dumped his boy friend Grand P.

Today many have been left talking After reports claiming that Grand p was hospitalized for a leg dislocation reached many through social media. According to social media platforms, it is reported that the leg was dislocated after the two had a 'fub moment'.

This incident has caused online debate as many claimed that the weight of the lady is the one that caused for dislocation of Grand P hip. Although the good news is that the musician is in good state and many are hoping that he will regain his form in coming days.Although their relationship has been slammed by many as they have claimed that it is being driven by money as in the past weeks EU Doxie has threatened to leave him. We saw Grand P beg for their love which forced the socialite to ease his stand and go back to his boyfriend. Him being hospitalized many have wished him a quick recovery

Painful: Another KMTC Student Murdered By Lover In Cold Blood

RIP: Tearful Weekend as Another Medical Student is Brutally Murdered By Her Boyfriend