There was drama in Kirinyaga County after people allegedly associated to Governor Anne Waiguru removed a billboard of Women Rep Purity Wangui Ngirici. 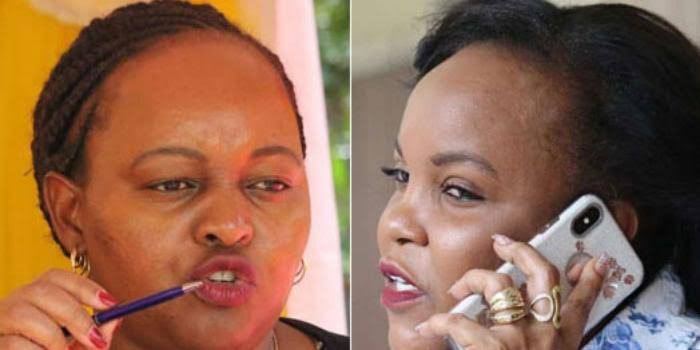 Police were forced to use tear gas after Ngirici's supporters conducted demonstrations in efforts to stop the removal of the billboard.

Speaking during the incident, Andrew Ngirici who is husband to Kirinyaga County Women Rep Purity Wangui Ngirici said that he has made full payment required for the billboard. Ngirici added that the materials used to make the billboard belongs to him and therefore nothing else should be displayed on the billboard without him being consulted.

Andrew went ahead and said that it was Governor Anne Waiguru's plans for the removal. He accused the governor of paying youths petty cash to remove it.

However, police dismissed the Accusation and said that Ngirici's banner was removed from the billboard in efforts to clean the town ahead of Mashujaa day celebration which will be conducted in the County. They added that the billboard will contain a banner with the images of Kirinyaga County Governor and the president as a form of welcome to the Head of State.

But Mr Ngirici dismissed the report and said that there are many billboards in the town where such banner could be put.