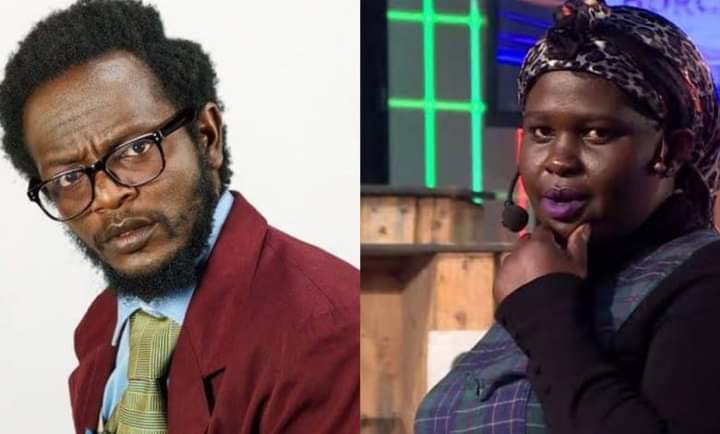 Just there other day two comedians Hamo and Jemutai who once shared a Churchill Show platform decided to put their dirty linen in public. Following the greasy push and pull; here is an outline of the two lovebirds' story:

2. Hammo is married and Jemutai knows that well.

3. Jemutai and Hammo’s wife are friends, then two talk and interact more often.

6. When Jemutai got pregnant, Hammo chased her out because “he wanted to protect his fame”

7. So Jemutai moved out to a single room, no bed, no gas no food etc. She’s heavily pregnant.

9. She took a break from comedy (Churchill Show)

10. It’s at that time that Hammo landed a Ksh. 10M endorsement deal.

12. She struggled alone to clear the bills and they are discharged from hospital.

13. She then decided to go back on stage (Churchill) just 2 months after giving birth, even before she could heal properly. She starts making money again.

14. Hammoh goes back to her again (2017). He apologized and they reconciled. Hammoh promises to be a responsible father to her kid.

16. Hammo is broke again, the first wife is pregnant.

17. Hammo wanted to go to South Africa but didn’t have money. Jemutai gives him 50k from her savings

18. Hammo’s first wife gives birth. Jemutai is the one who cleared hospital bill and did all the shopping for them.

19. Schools reopen and Hammo’s kids need to change school. Jemutai buys the new school uniform and all the shopping and pay school fee

23. After all her efforts in making him great, she never got even a shilling from him.

24. It’s then that she decided to go back to Churchill Show.

26. Hammo gets mad at her for going back to Churchill Show. Calls her rebellious

27. September 2019, Jemutai lands a deal with Safaricom. She helps Hammo relocate to a better house.

28. She runs out of money again. Hammo is also broke.

30. Jemu gets back to hustling, selling stuff online sometimes getting home late.

31. Hammo gets mad at her and even claims he is not the biological father to Baby No. 2

32. It hurts Jemutai so much since she was sure she never had any other man

33. Hammo at this points decided to walk out on Jemutai

34. A month ago, Jemutai’s baby fell sick and she decided to call the father, Hammo. She finds out that she has been blocked everywhere.

“I know he doesn’t want anything to do with us but please I don’t want him to come back later and corrupt the children’s’ minds” Jemutai says.

Is Jemutai being too good? Did she fail to learn from her past mistakes?

Meanwhile let’s all support our girl!