By Nowyouknow_ke (self media writer) | 3 months ago

Recently,Sauti sol went ahead and decided that they will not allow their music to be "taken advantage of" by the on going political scenes in the country.

The band issued a statement saying they do not associate themselves with any political party and candidate .

This was followed by criticism from netizens who seemed not to be impressed by the decision and it seems that Kenyans were ready to prove their point to the band.

The afro pop band has just lost 2000 YouTube subscribers as they continue to fight for their song"Extravaganza" copyright. 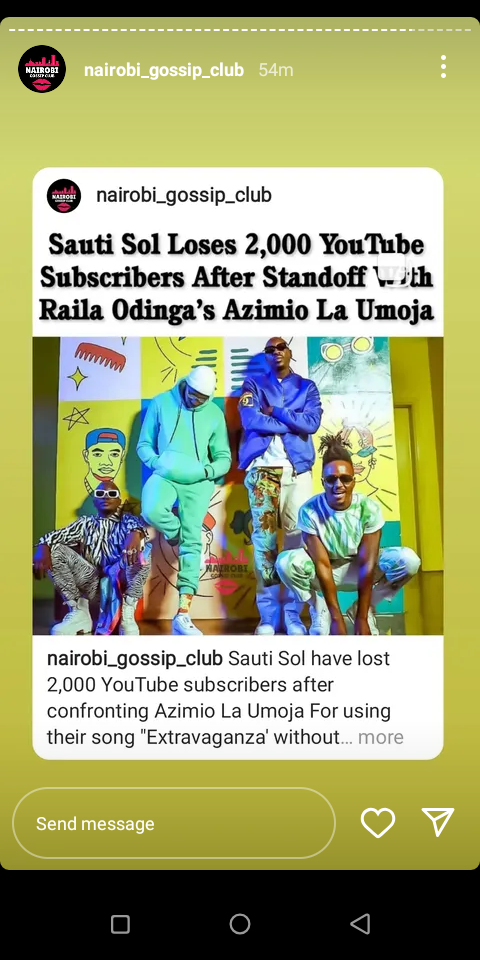 There are however clashing statements from the Kenya Copyright Board Executive Director Edward Sigei who issued a statement saying that though the Azimio La Umoja One Kenya Coalition had copyright to use both local and international music for their campaigns they didn't not have synchronization rights.Saying that they used a sounds recording as a sound track instead.

While the MCSK CEO Dr Ezekiel Mutua defends the coalition party by saying they did have the license to use the song.

Bien, a member of the band took it to his Instagram saying that he is supprised with how Kenyans are backlashing them instead of supporting.He said that it is a shame that Kenya's education is failing it's citizen since all he saw was uneducated people behind the keyboards.

He further went ahead to say that they will not back down on fighting for their rights.

We would definitely love to see how this ends . Despite the backlash,there are Kenyans who seem to support the band in their quest for "justice"

@Wangari_wanyeki ; Here's to knowing your worth!And standing by your truth.

@Shaqtheyungin ; Sol for the win!!

What do you think will happen to the group's career if this continues ?Will they continue to lose their fans during all this ?How does the Azimio La Umoja plan on solving the issue ?

Content created and supplied by: Nowyouknow_ke (via Opera News )