1.Kofi Annan negotiated Kenya from the brink of all-out war that would have torn the country apart in 2008.

He famously said he would not leave Kenya until peace was found. This was after 1000 people had been killed and more than 500,000 people displaced after an election disputed by Raila Odinga and Mwai Kibaki. 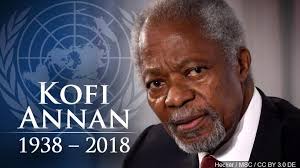 2.Nigeria and Cameroon were on the verge of war over the oil-rich Bakassi peninsula in the mid 2000s.

The peninsula had become disputed due to some sort of historical confusion of trusteeship during colonial times when it went from under German to British to French oversight. It took Kofi Annan to bring the two countries to a resolution.

3.Kofi Annan was responsible for bringing the UN and civil society groups together to draw a global plan for sustainable development which resulted in the Millenium Development Goals which have gone a long way to reduce poverty, AIDS and conflict in Africa.

In fact, in pursuit of MDGs and the later SDGs, Kofi Annan directly negotiated with big pharma to bring HIV/AIDS drugs down to the price range where the worst-affected (especially in Africa) could afford it, by asking them to allow generic drugs to be produced by competitors. Prices have dropped from $15,000 per year to about less than $80 a year now. 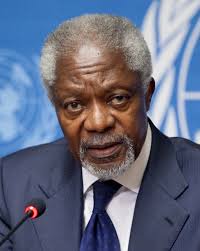 4.Kofi Annan worked with the Africa Progress Panel to improve political governance, environmental responsibility and mitigate climate change effects on the continent after his UN term.

He has used the body's extensive links in politics, business, finance and civil society to lobby attention for climate impact on Africa's poor and marginalised, advocate energy access and utility reform and increase justice, equality and human rights on the continent among others.

5.He started the Alliance for Green Revolution for Africa (AGRA) to effectively push funding and policy support for the continent towards food sufficiency, improving the plight of farmers and increasing environmental and climate-friendly agricultural practices.

6.After the world looked on helplessly while the genocides in Rwanda and Srebrenica occurred in 1994 and 1995 respectively, Kofi Annan pushed the UN to see sovereignty in a totally different perspective.

He initiated what is called “The Responsibility to Protect” whereby the international community automatically gets mandated to step into countries where governments are either unwilling or unable to protect their citizens in times of unrest. This played out perfectly in Gambia in 2017 when the defeated Yahya Jammeh’s refusal to stand down was threatening civil strife. A couple of West African countries, empowered by this new responsibility and wanting to avert another humanitarian crises in the region, marched troops into the country and forced his resignation, ending his dictatorship and 21-year stay in office.

Is this legacies outstanding? Rest in Peace Kofi Annan.

The Richest Person in Kenya According to a New Report, Check-out His Net worth