Susan Wakapee Speaks For The First Time, Reveals Hard Things She's Going Through As She Campaign

By NEWSWIZARD.COM (self meida writer) | 11 days

While speaking at Inooro TV on Tuesday, former Juja Constituency Member of Parliament's Wife Susan Wakapee has opened up for the first time after the death of his husband. Susan revealed some of the things he's going through as she's campaining and the kind of insults she's going through. 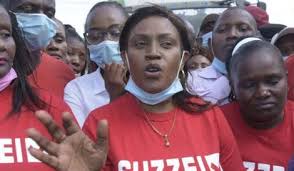 "I'm going through insults from the people who feels that I did not mourn my husband enough and I immediately ventured into Politics. There's another section going on Facebook to tarnish my name. These are people who have been paid to insult me on social Media. I think it's hard to campaign as a woman than being a man," revealed Wakapee.

"I can remember my husband for being a good husband. He stood with his family, and as you know with many politicians, he never neglected his family. I remember when he was in office, I used to take lunch to him and what used to surprise me was that he used to share that food with those around him. My husband was very dedicated in serving the people of Juja Constituency," said Susan Wakapee.

"My husband started by losing his memory, and later he became unable to move," revealed Susan.

"It's good to clarify. My husband was a hero, and he also has leaders. It's true my son had said that he would vie and just because he's a grown up, it's his Democratic right to vie on any seat. But later we sat down as a family and he finally endorsed me as his mother.

Wakapee's wife went ahead to refute claims that he was favoured In being given Jubilee's Party ticket.

"It was not a favor we all went for nomination and it was fair. Jubilee is a party that is fair," continued Susan Wakapee.