By NewsKeManyorio (self media writer) | 3 months ago 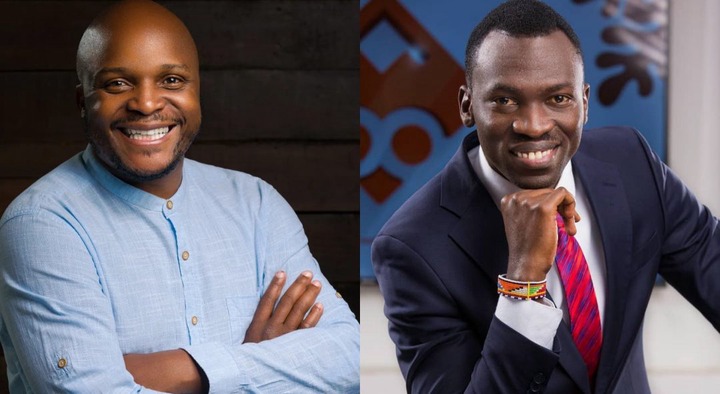 Speaking on his radio show, the comedian took issue with Ombija, noting that he took too long to take his relationship to the next level.

“Trevor is an amazing man, a lively person and a great human. He is one guy you sit next to and you’re just like, ‘wow, I’m honoured being in your presence

“A young man who is level-headed and an amazing guy, you get what I mean, but I think it took too long, 10 years yawa,” said Jalang’o.

Jalang’o argued that Ombija should be married with two kids, further adding that the lady could have grown tired of waiting for the anchor to officiate their relationship.

“10 years Trevor you should have already taken the dowry, have two children with a house in Diani. I think that is where my brother went wrong,” he added.

Speaking in a recent interview, the journalist disclosed that he is not looking for a partner at the moment because he was badly heartbroken and he needs to fix himself first.

Ombija admitted that he is yet to heal from the hurtful break up.

“I was badly heartbroken. I am single and not looking because I need to fix myself first. Everybody deserves the best version of the other person. Don’t go into a relationship when you are broken. Right now I will admit it,” Trevor said.

The news anchor further disclosing that he had paid dowry to formalise the relationship.

“I am from a relationship that lasted 10 years. It is one of those relationships that were over, then they are back again. I actually took dowry to her home six years ago, then she suddenly left. She said that she needed to find herself,” he added.

“I tried forcing issues for a while! You know when you are dumped and then you try to insist that you can work it out? Ukiachwa, achika. I have accepted and am fixing myself,” said the news anchor.

Content created and supplied by: NewsKeManyorio (via Opera News )