By Mtukufu (self meida writer) | 1 months

Citizen tv is becoming a home of Kenya's telenovela, with just the concluded Maria tv series, there is already a replacement that began airing yesterday evening from exact time as Maria tv series.

Although the tv series dubed Zora is a brand new series, some o the faces are not going to be very new as the series itself. We are going to encounter some of faces from Maria tv series.

The producer of the tv series who is also a well-known Citizen tv news anchor Lulu hassan has not stated why she has decided to use some of the most familiar faces in Zora.

Below are some of the familia faces from Maria that are going to feature in the newly launched tv series Zora. 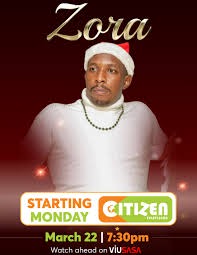 Meja was a character in Maria tv series, he played a very cruicial role as a hired assasin or rather hitman. He was always an accomplice in the evilness of his boss William Hausa. In Zora he is playing a family man role.

Sofia featured in the just concluded Maria tv series and she played a role many of ladies would fear playing. She was very much okay and pulled the character as a reality.

In Maria tv series, Thomas played an ordinary garden boy role whose feelings were being played with by with the rich and spoiled girls. He however made his intentions clear at some point.

What are your thoughts on the new tv series dubed Zora? Kindly share with us your opinion in the comment section below. Please do not forget to hit the above follow button for more important updates on Zora.

Tottenham and West Ham Keen to Avoid Finishing No.7 in EPL as European Conference League Beckons