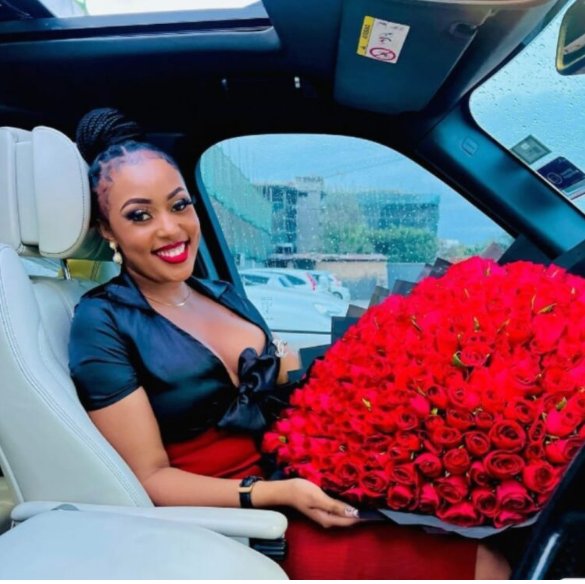 Several months after declaring the end of her romance with businessman Kennedy Rapudo, Kenyan socialite Amber Ray has made hints that she is once again looking for love.

Amber thanked her boyfriend for the wonderful gesture on Tuesday by posting pictures and a few short videos of herself holding a sizable arrangement of red roses on social media.

If her man treats her the same way, Amber stated in her caption that she is prepared to have a child with him.

“When He matches the flowers with your outfit  …Huyu akiendelea hivi nitamzalia  #amberthebrand. Siri ….play for me 1000 stems by Him. #amberthebrand,’ Amber wrote.

The posts left her fans confused many guessing that she had rekindled her lost love with businessman Kennedy Rapudo.

Almost immediately, Rapudo also put up insta-stories that suggest that he is the one spoiling Amber Ray.

“In the end, I will always come running back to you, not because I am weak, but because I fell in love with you.

“Acting all hard, that’s for homies that’s lonely,” read a post from Rapudo.

Kennedy said that his relationship with Amber Ray was destroyed by insurmountable differences.

Last mont, rumours of break up between Rapudo and Amberay had surfaced online. This comes after A fan asked her if she was still dating with Rapudo,

“Are you still dating Kennedy?”

In her response, Amber stated that she was tired of pretending, adding that her fans would confuse her for a joker.

Amber urged her fans to appreciate her the way she is and avoid passing judgment.

“I know mahali imefika, I might look like a joker but manze, I don’t know how to pretend. If it’s not working, it is not working. So munipende tu vile niko,(Just love me the way I am).”

She had split up with businessman Jamal Roho Safi a few months prior.