Business and media mogul SK Macharia has for the first time disclosed how his loyalty to the late Jaramogi Oginga Odinga who is the father to the former Prime Minister Raila Odinga pushed him to launch Citizen TV.

SK has earned respect over the years for his strong brand the Royal media services which is an umbrella that hosts a number of radio stations and television stations but Macharia now credits the county's first Vice president for his tremendous progress.

While addressing a rally on Tuesday, October 19, Macharia revealed that he was a close confidant to Jaramogi Oginga Odinga and even funded his 1992 multi-party elections when he was contesting against the Late Daniel Moi and Kenneth Matiba. 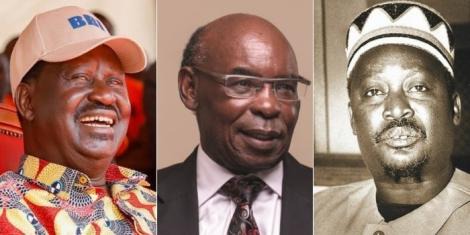 His close ties with Jaramogi endeared him as an enemy and encountered hostility from his community and recalls being beaten by certain politicians and residents from his region.

Macharia stated how he paid all Television commercials for Jaramogi at the Kenya Broadcasting Corporation popularly known as KBC but unfortunately, none of them was being aired and this inspired him to open Citizen TV.

"We built the station because of his Raila’s father. In 1992, KBC did not air even one commercial I paid for Jaramogi. I almost died when he lost the election for I believed he could never lose. I walked to KBC and told them I wanted a license. I applied for one, to broadcast my own TV and radio. We did not know how to broadcast. However, we fought for four years in court until I was given my license,” Macharia stated.