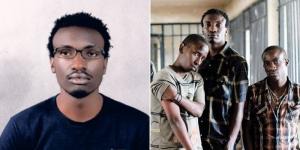 Olwenya who played as Oti in the film released in 2012, was pronounced dead after being taken to a Nairobi hospital.

The cause of his death is yet to be known with the family expected to give detailed information on what transpired.

"Kenyan Actor Olwenya Maina, popular for his role 'Oti' in Nairobi Half Life film is dead. He collapsed and was pronounced dead at the hospital," KTN news anchor Brian George announced.

Apart from starring in Nairobi Half Life as one of the main characters, Olwenya also worked as a voice-over artist in various adverts.

Some of the radio stations he did voice-overs for include Radio Africa group and Radio Jambo.

Kenyans took to social media to eulogise the media personality who many described as a rising star.

Classic FM radio host, Maina Kageni described his admiration for the actor stating that he had a great future ahead of him.

"We'll miss you here at Radio Africa... among the very best voices in East Africa.... great actor, superb talent!!!! Recalling your outstanding role in the movie Nairobi Half-life... what a game-changer you were, big boss! Rest In Peace," he eulogised.

Others also expressed their shock over the sudden death of the actor who was working on other projects.

"You’ve been constantly on my mind since we started filming with the African director reminiscing what great talent you are. Why? My heart is so heavy. Go well bro. We shall meet again," Kate the Actress wrote.

Other movies that Olwenya featured in include Stories of our lives, Taliya and Pendo.

Leave Me Alone, Former Maria Actress Tells Off US Army Officer Ex Boyfriend Says She Is Not Single