By BOYDFUNATECH (self media writer) | 1 year ago

Fred Nyongesa Ongalo is a renown journalist who worked forb KBC radio for 31 years. He is remembered for his popular program "viumbe vyenye uhai" which was greatly loved by listeners. 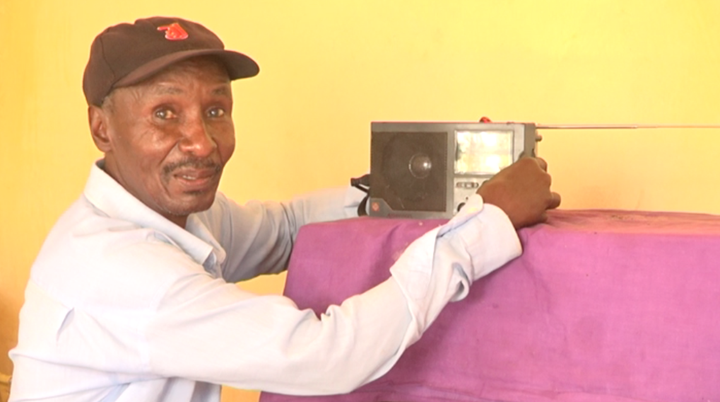 Veteran Journalist Fred Nyongesa Ongalo at his Bilibili home in Kamukuywa Tongaren constituency, he has urged journalists to restore professionalism in the media especially radio in order to remain reliable, source files.

He says he started his career in 1974 when Voice of Kenya (VOK) was the only radio and owned by Government before it rebranded to KBC.

He says the government had a very big influence on what goes on air unlike these days where there is freedom to broadcast anything, however, he warns that the freedom can be dangerous to the nation if abused by listeners and presenters.

He has acknowledged that radio still has a major influence to Kenyans but its dynamics have greatly changed in terms of technology, real time feedback and professionalism.

"In our days, it could take up to two days to air a news item unlike today, field journalists were also tasked with ensuring they get authentic news which they were directly responsible for. Nowadays we have social media and online radios, most of which are not used by trained journalists and can easily propagate fake news," he said.

Ongalo also points out that nowadays we have many radio stations and most of they have lost the objectives of the media industry.

"You ask a media owner nowadays why they started a radio and you will be surprised to find out that many just target profit without putting in mind their effect to the society, radio is supposed to foster national cohesion and unity rather than friction among listeners, the topics, music and promotions should be chosen in line with national unity," he added.

He has also asked journalists to maintain the professional lanes while handling radio especially in the newsroom and one on one interactions with listeners.

"The newsroom is very sensitive and should only be handled by professionals, we should not allow fans and politicians to send news to the newsrooms via whatsapp and other social media platforms, this will lower the dignity of the profession as it is evident today," he said.

He has also called upon media owners of private radio stations to consider proper pay to field journalists so that they enrich the news desks.

Ongalo was also a sports journalist who trained at Greece International Olympic Academy and has mentored many journalists in the profession. He was speaking on 12 February, The International radio day. Kindly follow, subscribe and share. Do not forget to give feedback.