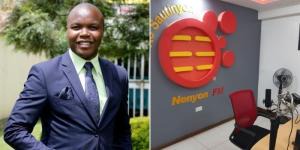 In an interview Kosgey noted that the Kalenjin-language station headquartered in Kericho secured two frequencies, 104.3 FM and 104.2 FM, from the Communications Authority of Kenya (CAK).

The station, which was launched in April, covers Rift Valley counties, with its management estimating that it attracts a listenership of 1.2 million people per day.

Kosgey further noted that he has hired eight journalists to run the 24-hour commercial broadcaster including Mzungu Mwafrika and Faith Chebwogen, who are both local radio celebrities.

Kosgey aims to make the station a market leader in the local news business.

The station's studio spots state-of-the-art broadcast equipment and its walls are emblazoned with its logo, a candy red think-bubble with yellow horizontal lines.

The cheerful reporter, however, noted that his journey has just begun and is in need of 'more studio equipment so as to get quality transmissions.'

CAK has since gazetted Nenyon FM as a commercial free-to-air radio station under the Nenyon Media Services company in which Kosgey has a 100 per cent stake.

The reporter's journey kicked off in 2013 when he joined KTN (under Standard Group Limited) as a cameraman before decamping to Citizen TV as a correspondent in 2018.