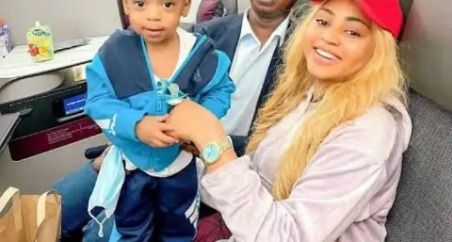 Regina Daniels is a Nollywood actress whose beauty captured many people’s attention and her acting tactics have left many admiring her.

She got married to a Nigerian billionaire and a politician as a sixth wife.

This move left many amused as she was dating a very handsome young actor who they seemed to have been enjoying with every bit of seconds. She later chose to marry the 61 year old Ned Nwoko.

Recently, blogs have been out spilling tea about Regina Daniels marriage facing storms.

She recently moved to her mother’s home in Asaba. Romuors had it that she was there because of her second pregnancy but it turned out to be a lie.

Apparently her husband is intending to marry a third wife. It is said that he had introduced his third wife to some if the politicians in Nigeria during a summint they both attended.

Even though he has kept her from the public, news spread fast and nothing can be hidden in the face of netizens.

The first blogger who spill this tea was threatened by Ned Nwoko and the news was later rendered to be null and void.

A few days later, Regina was seen at her mother’s and she has been staying there for quite some time

The only other reason that would make a. Married woman to stay at her mom’s house for an extended period of time is when she is pregnant and this is not the case here.

Apparently, Ned Nwoko has completed the first marriage rites with his third wife and are just waiting for the right time to conduct the second one.

His reasons for keeping this news away from his first and second wife is only known to him and seemingly, the consequences of his actions are seen as his beloved second wife has fled off to her mother’s Home to take a break

How To Make Your Crush Fall For You

David Murathe, Martha Karua Warns What Will Happen Should DP Ruto Win or be Defeated By Raila Odinga