By Lawrenson_News_Updates (self media writer) | 2 months ago

A group of women in Kilimani is counting losses after an amn impersonating TikTok dancer David Moya charged them over Ksh 40,000 for a birthday party only for him to go missing.

According to https://www.tuko.co.ke/people/relationships/475908-fake-david-moya-swindles-group-kilimani-women-ksh-40k/, The women contacted the con through Facebook and went ahead to pay for the services only for the star not showing up.

According to M-Pesa messages seen by Tuko Kenya, the recipient known as David Kamau received the monies from different women before going offline.

Fridah Meeme, one of the victims said that they fell for his craft because he had tailored his Facebook page in a way that it looked like the real Moya.

"Everything he shares and posts is a David Moya replica, including how he responds to messages," Said Meeme. 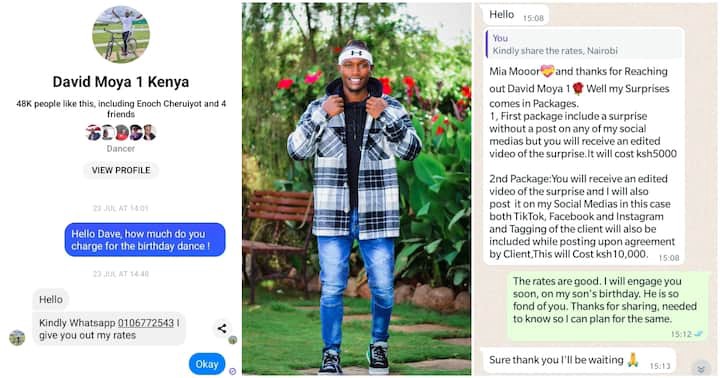 After the money was sent, the con did not pick up their calls and later he switched off the phone later.

David Moya told his fans that he doesn't take orders from social media because he knows many people use it to swindle others using his name.

"People should only pay after doing a video call with me or visit my office at @Moyacityspa located at Applewood Adams or through Instagram at Moya_supriseltd/Moyadavid1," He said.

He expressed his disappointment for the people reaping by using his hard-earned fame adding that a few weeks ago a police officer was also conned ksh14,500 when he had booked him to surprise his girlfriend.

After doing a background check up the officer realized it wasn't one person but a group of people operating from Nakuru town known as Confirm.

"At least three people are conned each day by people using my brand, and most of them are using an M-Pesa name similar to mine" Moya said.

According to him he has been swindled more than half a million by these swindlers.

Content created and supplied by: Lawrenson_News_Updates (via Opera News )