By Koechii (self media writer) | 10 months ago 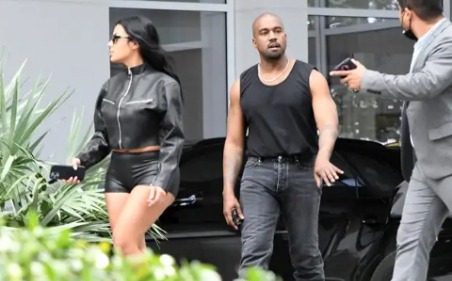 Chaney Jones has said that she doesn’t look like Kanye’s ex, Kim Kardashian.

This came after some two of her fans started comparing her to Kim.

She has denied seeing any similar appearance between her and West’s ex.

Asked by TMZ if she can see any similarity between them, here is what she says;

Shutting the story between her and Ye’s ex-Wife, she says that should not appear in any of her conversations.

“We don’t speak about her,” Chaney said of Kim.

The duo, Kanye and Chaney, have been spotted several times since the former broke up with Kim.

They were seen together partying and that’s when many of her fans started to compare the two.

Her looks according to her fans resembled that of Kim. Last year, 2021 Kim rocked the same outfit during the People’s Choice Awards in December.

Kanye West seems to be moving on with the dating games.

It came after Kim Kardashian and Pete Davidson were seen for the first time on Instagram getting cosy.

A source close to Ye said that ;

“Ye is having fun with Chaney. They have been spending a lot of time together in the last two weeks and he likes her company,”

‘She travels with him & they are having a good time,”

The insider however says that Kanye is not “dating anyone exclusively, he still has a soft spot for Kim and would drop anything just to have her back.

” He likes to have a distraction and would drop anything for Kim if he had a chance, ” a source close to him said.

He has always not approved of Pete Davidson dating Kim and doesn’t want Pete to get closer to their children with Kim.