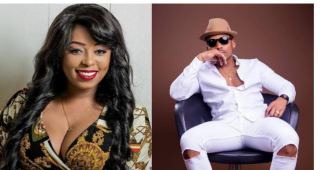 Citizen TV anchor Lillian Muli dropped a huge bombshell on Instagram by revealing on Tuesday, May 18 that the identity of her crush is RnB singer Jacob Obunga, alias Otile Brown.

The media personality had invited her followers to interact with her through a Q&A session on Instagram and one of the questions one of her followers curiously asked was who was her celebrity crush.

Lillian named the Baby Love hitmaker as her celebrity crush while praising his talent.

"Who is your Kenyan celebrity crush?" the fan asked Muli, to which she responded, "Otile Brown is very talented."

However, many fans were led to question a few disparities. For starters, Lillian Muli is 37 years old while Otile Brown 27, a 10-year age difference, despite the generational fallacy that age is merely a number.

Nabayet would however reveal in June 2020 that she tried to dump the singer, but failed, having lived in Australia and Brown remaining in Kenya at the time.

She expressed that she was uncomfortable with the long-distance relationship and it was the sole reason that she had tried numerous times to call it quits.

“Long-distance is not easy at all and it has been the hardest experience. When you create that bond with someone you’ll have to fight for it. We have tried calling it quits so many times. People were always asking why we were not together but that was never the case, sometimes you are just tired of fighting.” Nabayet revealed in a past interview.

Meanwhile Muli had earlier in the year expressed her regret for falling for a man who she described as a serial cheater. She was responding to a fan during a Q&A session on Instagram, who had asked her what she regretted most.

“Biggest regret?” asked the fan, to which she responded by answering “Falling in love with serial Cheat”.

Another fan wanted to find out if she was dating, to which Muli dismissed by stating she was single.

The mother of two and love have not been the best of friends over the years, with Muli having gone through her first divorce with her former husband Kanene. She would later tear into her second-born son's father for cases of infidelity.

“The only regret I have in life is settling for less when I could have had so much more. Set your standards and stick to them unapologetically,” she shared.

“As public figures, we meet all sorts of people, and most just want trophies whether you are well known or not be very careful who you allow into your life don’t go giving your heart to everyone. Sociopaths will keep you entangled in their web of lies, and you will be one of their many victims."

"When you actually believe someone is true to you only to find out they are community husbands you are safer stepping aside," she addressed online.

Muli urged netizens to desist linking her to Jared Ombongi, to whom she was previously associated with.

"Nobody should ever tag me in posts about Ombongi who has previously been associated with me, I disassociate myself from such links from today,” Muli said