By Becky (self media writer) | 2 months ago

A Kisumu hawker has scored a life-changing deal with a Nairobi-based elite fashion firm after his comedic films while selling women's garments went viral on social media.

Sande Mayau aka Mayau Dream Chaser's videos went viral when he decided to disguise up as a lady while selling his products.

The actor and content creator has won a gig as a brand ambassador for the Kilimani-based menswear boutique, which carries all of the latest brands from across the world.

On September 15, Sande and the retailer both announced the news on their social media profiles.

The hawker was flown from Kisumu International Airport to Nairobi's Wilson Airport, then taken to the retailer's Kilimani headquarters.

"Mayau Dream Chaser is a fictional character. I used to sell women's clothing on the streets of Kisumu, but now I'm flying to Nairobi to sell men's clothing."

Sande said in a video taken at Kisumu Airport, "I have landed the job (with the fashion brand)."

Later, the hawker was seen promoting the garments and selecting a bale of menswear for himself at an expensive designer establishment.

Sande used to work at a stall near Kisumu Boys before being famous. In early September 2021, he shifted to his new identity, selling his products while disguised as a lady.

"I had no idea it would go this far, but God is amazing."

"I praise God for making my videos so popular. I had no idea they'd be so widely circulated, "After releasing his debut video on September 6, he claimed. 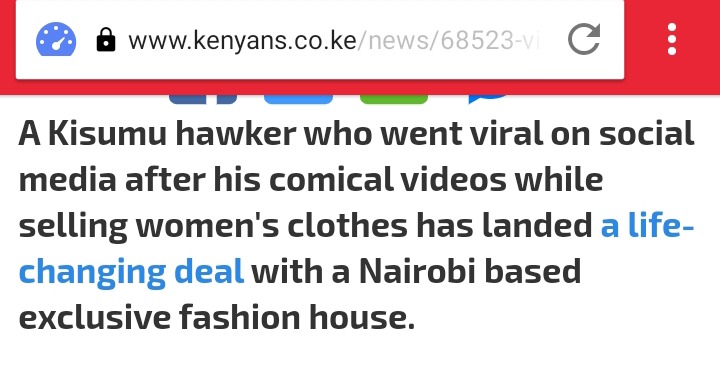