By Toiwinnien (self meida writer) | 1 months 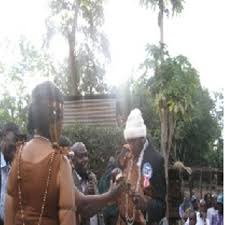 In the Kikuyu traditional culture, ngurario ceremony marked the climax or the final part of marriage formalisation process.After the ceremony, the woman completely becomes part of her husband's family and can never be divorced or marry any other man.

In fact, this rite made the marriage so final that even if the woman got a child from another man, the husband had to take care of the child and take it as his own.

Traditionally, ngurario was done before the girl went to the man's home, but nowadays, it is mostly done after.

The ngurario Ceremony involves at least five elaborate steps, with each having a significant meaning;

1. Payment for being relieved Wauri

On the day of the all-important ceremony, the husband's family and their guests will be carrying with them some assorted gifts to present to the wife's/bride's family before entering the gate of the latter's home.

However, for them to be relieved of their gifts, it was mandatory for them to make some kind of payment; they will have to give some money which is called (wauri). Nowadays, it is in the form of cash that is usually given to ladies on the bride’s side so that they can share amongst themselves.

2. Selecting wife from among many ladies Gucagura Muka

After the husband's family and guests accompanying them are ushered into the homestead and served with food to their satisfaction, the actual ceremony begins by a number of ladies, say 15, entering the house where they are wrapped from head to toe with sheets (macuka) and then divided into at least three groups.

Each group will be called at a time till the husband identifies his wife to the jubilation of present guests. He will, however, be careful not to pick somebody else's wife because there will be a penalty for that.

At this juncture, the husband in front of the crowd will have to agree, though hesitantly, that even if the wife gives birth to a child out of wedlock, he will take care of it.

The man of the day is asked to give the wife some ears from the slaughtered goat to eat and as she eats, he will tell her the exercise is meant to make her have ears to hear him whenever he calls her.

Here, the wife will give the husband porridge (gukundio ucuru). At the same time, about five men accompanied by their wives will be called upon to come in front so that they will also be given porridge by their wives.

The woman of the moment may begin by polishing the husband’s shoes, combing his hair or cutting his nails before wrapping him a towel at the front to act like a baby feeder, all through trying to soothe him so that he may accept her porridge. Once he agrees to take it, the other five men follow suit and they are also fed by their wives.

From there, other guests will take the porridge. It is while guests are still taking the porridge, that selected people from both sides will enter the house to go and give some dowry which will mark the end of the ceremony.

Kenyans Scramble For Matatu's In Nairobi In Fear Of Curfew

The Cry Of Kenyans' Concerning Curfew