Raila Names Two Lads Who Gave Him Ksh419,467 Shoes That Got Him In Trouble

By MartinMbevi (self media writer) | 5 days ago 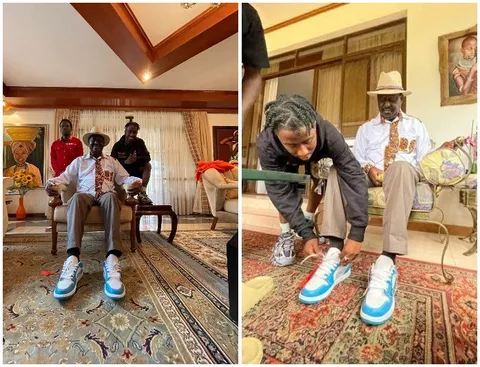 The former prime minister and the leader of ODM leader set tongues wagging when he showed up at Nairobi University wearing expensive sneakers worth nearly a half a million shillings.

Raila on Tuesday October 12th met youths drawn from Mount Kenya region and he decided to put on a youthful look. This has caused alot of questions within kenyans.

Critics of the ODM leader quickly started roasting him on social media claiming that he was blind to the plight of the youth as he was wearing expensive shoes which ordinary young men and woman can’t afford.

Raila was however fast to remind his critics that the shoes were actually donated to him by two lads sometimes in April this year.

Nairobi fashion designer known as Nairobi West Niccur donated the shoes on April 22nd 2020 and even Raila flaunted them that time when he was given them.

Ali Abdi is only 20 years of age and the CEO of Thrift Trendy, an online shop in Nairobi. This year alone, the fashion designer has offered Raila over five pair of shoes including Yeezy Slides which is a brand belonging to Kanye West.