By Benweka (self media writer) | 26 days ago 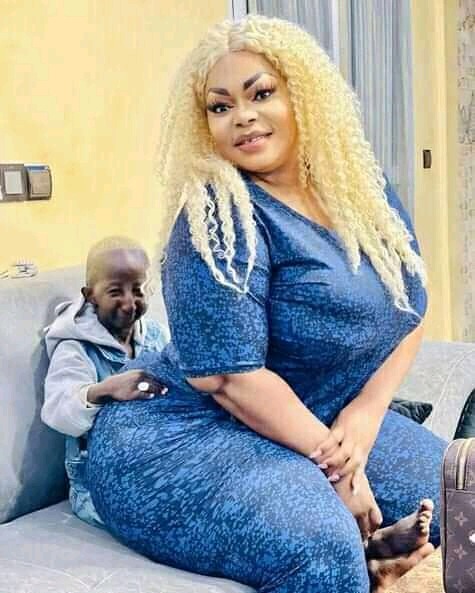 Guinean singer and online sensation Grand P has reportedly been hospitalized due to a hip dislocation he suffered after an intimate session with his incredibly ‘heavy duty’ fiancée, Eudoxie Yao.

The Ivoirian plus-sized model reconciled and got back with Grand P in August after their breakup made headlines in July. The couple shared a video acknowledging street gist that they were back together and in the viral video shot at an event they had both attended, Eudoxie could be seen grinding on the musician as he sat on a chair.

Romantic and thrilling as it might have been, it did cost the diminutive celebrity not only his comfort but also his health.

The business magnate complained of having difficulty standing up hours later.

Grand P, whose real name is Moussa Sandiana Kaba, was born with progeria, a growth deficiency, also known as Hutchinson-Gilford Syndrome. This means that he started aging right from birth. The disease limits the size of the patient to 1meter or 10 at most with a bodyweight of 25 kilograms.

The average life expectancy for a child with this disease is 13-years-old but others may live longer. The disease is characterized by high-pitched voices, visible veins, thinning, spotty and wrinkled skin, and stiff joints. The disease is rare and not an inherited one.

Grand P has not let the fact that he has progeria stop him from pursuing his dreams. He ignores the stares and harsh words of the people and continues with his life, something that has won the hearts of many of his followers.

In Guinea, he is known as a singer, actor, and social media personality. Grand P is a talented musician who has performed in some of the biggest stages in his country.

In 2019, he performed during a show by Kerfalla Kante at the People’s Palace in Conakry. This performance propelled him into the limelight in a big way. Those who had never heard of him now knew him and a lot of opportunities presented themselves. He got the chance to interact with the who is who not just in the entertainment industry but in the political arena as well. He was also among the celebrities who attended and supported Guinea in Cairo for the Africa Cup of Nations.

Signs of an Abusive Relationship That People Ignore

Church To Hold Senstization On Covid 19.