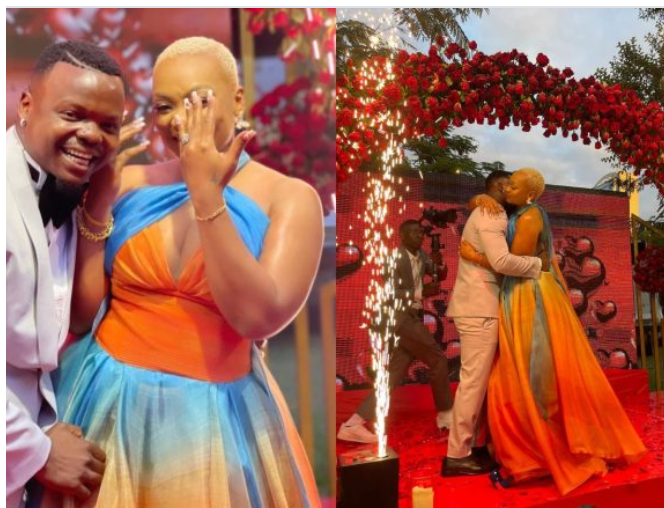 The Konde Boy crooner in a video was seen going down on one knee to propose to Kajala at a hotel in Dar es Salaam on Saturday, June 25.

He then slid the engagement ring on her finger as the fanfare rang in the air alongside cheers from attendees who witnessed the spectacular event.

The Mwaka Wangu hitmaker had invited the top media houses for a special reveal with Kajala at the hotel for a special late lunch. On her part, Kajala promised to love Harmonize for life.

“Rajabu, nitakupenda leo, kesho hadi milele (I shall love you, Rajab. Today, tomorrow until forever),” Kajala Masanja told Harmonize in front of the guests in attendance.

Kajala’s daughter, Paula Kajala was also present to support her mother’s engagement to the Tanzanian musician.

The engagement comes after the two rekindled their lost love with steamy, topless photos on Wednesday, June 22, which ignited endless discussions on Harmonize’s page, drawing over 230,000 likes and over 15,800 comments by the time of publication.

Kajala on her part had shared a short video on her accounts engaging in a workout session with Harmonize in the gym- for the first time.

While she penned down an appreciation message after Harmonize spoiled her with expensive gifts, the singer had hinted at proposing to her after he got her an expensive diamond ring during his recent Turkey tour.

“Yo! It’s my first big day ever, I will make it biggest Inshallah, having her in my life is something word can’t explain,” Harmonize captioned photos of the Diamond ring while he also got her and her daughter’s face tattooed on his leg with the words ‘I’m sorry’.

Kajala had sent shockwaves throughout the East African entertainment scene by following back her husband-to-be after unblocking him.

Harmonize was forced to go public in a last-ditch attempt to convince the actress to rescind the differences that forced them to part ways.

“Can someone please tell her to unblock me on Instagram?” the musician appealed in a past statement.

Not only was he granted his wish on Wednesday, May 25, but he also penned a comment on Kajala’s latest Instagram post that took their followers by surprise, indicating that they may have resolved their issues.

“Tanzania’s number one actress and Harmonize wife and Manager,” read his comment to her post which she captioned with “I mind my own business and talk to God a lot”.

Kajala then took to social media to share a quote by Stephan Labossiere stating “Forgiveness isn’t saying what they did was ok, it’s just saying you won’t hold onto that negative energy any longer”, another indication that they might have put their house in order.

The Konde Boy crooner on Wednesday, April 13 shared a short video of a Ksh6 million Range Rover Evoque with a custom number plate bearing Kajala’s name, as a gift to her. It was not enough. 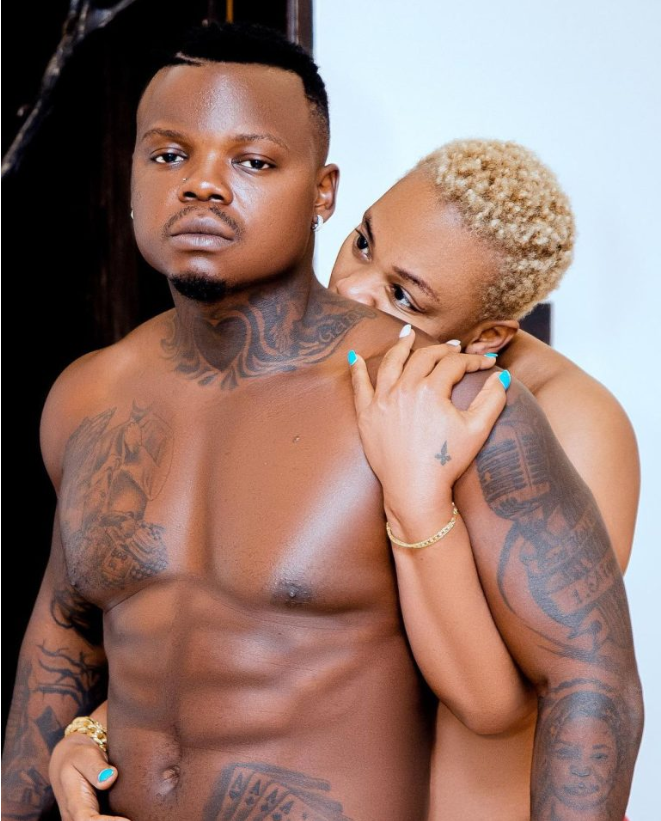 Harmonize then bought another Range Rover, this time a black-coloured one, so that she has two luxury cars in her inventory in case she takes him back. The two SUVs have custom number plates with her name that were priced at Ksh250,752 (Tsh 5 million).

Harmonize will want to avoid a repeat of his affair with Sarah Michelotti which ended disastrously in December 2020 after it emerged that he cheated on her and even sired a child out of wedlock.