Citizen TV News anchor Jeff Koinange, was all smiles while in the streets of New York on the morning of Saturday, October 16, after spotting his slogan in a popular restaurant chain.

In a statement, the news anchor noticed that he was going about his business in the robust city when he coincidentally found the restraint's signage with the trademark 'Oh my!'. 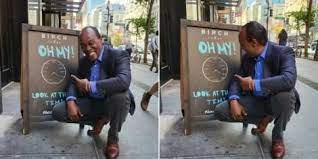 The signpost belonged to a popular restaurant known as Birch Coffee, which has stores scattered across New York City, selling products esteemed at Ksh1,700 (US$17) per piece.

For quite a long time, Jeff Koinange, who hosts the well-known JKLive show on Citizen TV on Wednesday evenings, has been associated with the slogan which he uses to open his broadcast.

He even made fun of the Central Organization of Trade Unions (COTU) Secretary General, Francis Atwoli, who is currently licensing his own brand name, 'Alaa'.

"So, there I was minding my own business in the streets of New York City, when I just happened to ran into this sign... Someone say 'OH MY'! Where's Atwoli? You simply can't make this stuff up," expressed Koinange.

The surprise came only hours after the celebrated news anchor and his team, including producer Monica Kiragu, went to the White House alongside President Uhuru Kenyatta for a meeting with the US President Joe Biden. 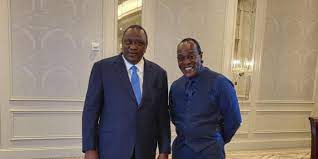 Koinange and his team flew to the United States to cover President Uhuru Kenyatta's trip, where he chaired an event at the United Nations office prior to meeting Biden.

Atwoli, on the other hand, wrote to the Kenya Industrial Property Institute (KIPI) seeking for ownership rights for the slogan 'alaa.'

In his application, Atwoli wants to have exclusive use of the word which he articulated during an interview on a local TV show in February 2021.

If the application goes through, one should get authorization from the COTU boss to utilize the word for branding purposes.

The word 'Alaa' circulated around the web for the better part of 2021 after Atwoli's exclamation during JKLive TV show hosted by Koinange. 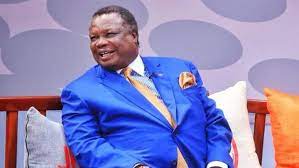 On the show, the COTU boss continued evading the question on the political aspirations of the Orange Democratic Movement party leader Raila Odinga in the forthcoming 2022 General Elections.