By DailNewsHub (self media writer) | 6 months ago

The 'Ndovu Kuu ' song that has been a hit in the country has been removed from YouTube.

The dance by artist Krispar popularly known as the Great Elephant featuring Khaligraph Jones and Boutrous Munene was dropped on Sunday over allegations of copyright. 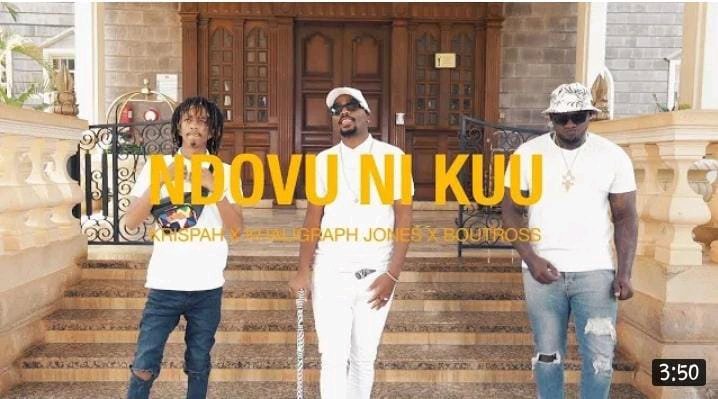 According to complainants, the song, which has since been removed by more than three and a half million people, has also been accused of defaming Kenyatta University.

Artist by the name of Dexta Briyanka who is believed to have reported the hit to YouTube officials claimed that Krispah used the rhythm of his drum to make the hit Elephant is Great.

Through his Instagram page, Dexta also claimed that the tablet was inciting violence at Kenyatta University.

"I have released YouTube because it violates my rights and also incites violence at Kenyatta University. Even a parent does not pay taxes. They say there are no KU courses. Let's agree in court if you have a problem," Dexta wrote.

Krispah for his part denied allegations of using Dexter's rhythm and claimed that his dance had nothing to do with the alleged original album.

He strongly criticized the artist who reported him and told him that he would take him to court.

The main elephant also defended his dance against allegations of defamation of Kenyatta College by saying that the abbreviation KU could mean anything while citing the examples of Kabianga University, Karatina University, Kisii University, Kenyan University, eating porridge and eating sleep.

In a telephone conversation between the management of the Great Elephant and the artist, Dexter claimed that he was the ambassador of Kenyatta College.