When KBC Was The Only Radio In Kenya 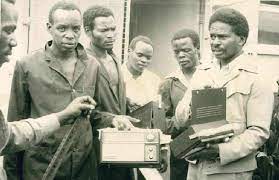 KBC was founded way back in 1920's during the British colonial rule. After independence it was changed to voice of Kenya.

KBC enjoyed monopoly since it was founded until early 90's when FM radio stations came up. For those who were brought up in the 80's and 90's are likely to remember most of the broadcasters of the day and program that were run during that time.

The most famous was "salamu za adhuhuri" and "chaguo lako". Since there were no mobile phones and social media we have at the moment people used radio to pass greetings to friends and relatives from across the country and also the neighboring countries.

veteran broadcasters like Ali Salim Manga, Mambo Mbotela Billy Omala Anunda Sakwa and the list is endless not forgeting a program called "yours for the asking" which was run by none other than Jeff Mwangemi.

After greeting there was a famous ending such as "KBC ni nusu yakuonana" which translates to KBC was half way seeing each other.

What can you remember on old days of KBC as the only radio. As always keep commenting and follow for more news.