By MkenyaNews (self meida writer) | 2 months 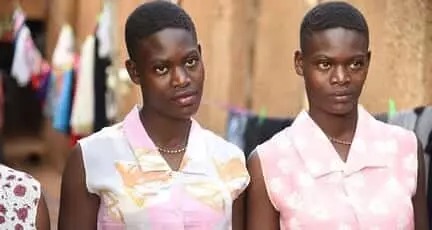 Famous Kakamega twins Sharon and Melon who came in the limelight in 2019 after a DNA test showed that Sharon, who had been raised by a Kangemi- based woman Angeline Omina, actually belonged to Rosemary Khavelele as she is an identical twin to Melon have resurfaced two years later.

According to a report by The Standard, the two are currently struggling to survive after well-wishers reportedly deserted them.

Together with their other sister, Mevis they have been at home for over two weeks over lack of school fees.

“Many who know me, think nimeomoka (I am successful) while my close friends say I am a celebrity who is poor,” a heartbroken Melon told the Standard.

Their mother, Khavelele said the financial struggles have been too much, adding that well-wishers who promised to take care of her children have disappeared. 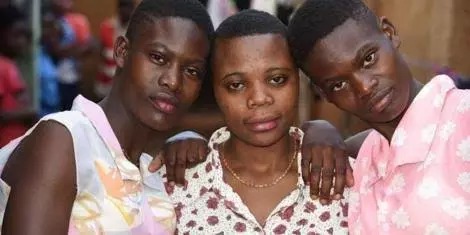 Together with their other sister, Mevis they have been at home for over two weeks over lack of school fees Photo: Courtesy

According to the mother, Melon and Sharon have school fees arrears of KSh 36,000 and KSh 81,000 respectively, while their sister Mevis has an outstanding balance of KSh56,000 with all arrears accumulating to KSh173,000.

“I thought my life would change after the incident. Little did I know that trouble was starting. My neighbours think we have money but we are really suffering,” she said.

“We do not even know the well-wishers who came to say they want to help us because they disappeared. Now my children are at home to fees arrears.”

The mother of 10 children further vowed to sue Kakamega Hospital for switching her children adding that she previously failed to do because a person who had an ulterior interest in the matter asked them to forgive the facility.

Please leave your thoughts in the comments section and follow for more news updates.

Moses Kuria Reveals Why Pres. Uhuru Should Be Grateful After BBI Suffers Setback In Court Ruling

Opinion: What Will Happen If You Won't Collect Your Huduma Namba Card By 12th December 2021

SA: Women Might Soon Be Allowed To Marry More Than One Man And Live With Them Comfortably

The Allowance Nominated Senator Isaac Mwaura Stands To Lose, After His Ousting