By Kenyanews.com (self media writer) | 1 month ago 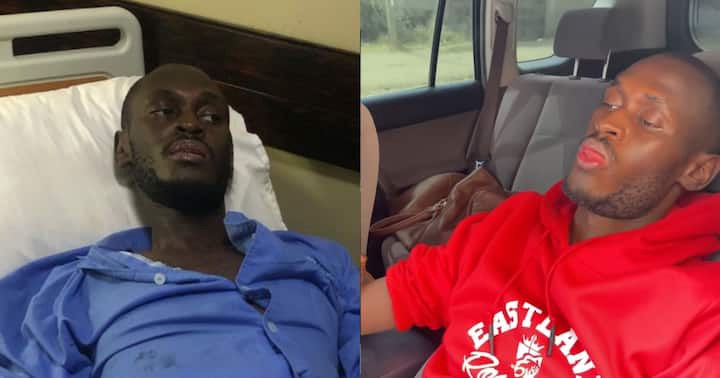 King Kaka thanked his doctors and family for being supportive and always by his side when he was hospitalisedIn a lengthy post, King Kaka narrated how his life changed after being hospitalised for three months and said it was his darkest moment in life

King Kaka is lucky to be alive. The father of three has revealed that he went to hell and back during three months he was hospitalised.

He shared a graphic photo he took a while back while still in hospital, explaining that two days after he was admitted at a local hospital, doctor's drilled his hip bone for a bone marrow sample.

"I was in between worlds fighting to see my family once more. I would force my last smile when Nana & Moms visited but truth is the nights got darker and I would be back in the ring with lif," Kaka narrated.

The Wajinga Nyinyi hitmaker said it was his darkest moment in life, and thanked his doctors and family for being supportive and always by his side.

Kaka's wife Nana Owiti, also shared a tearjerking story of his sickness, saying it was the hardest moment of their lives.

She shared a video of Kaka receiving treatment inside a car and said they were stuck in traffic hence couldn't make it to the hospital on time.

"On this day,he just got super sick and we couldn’t get to the hospital because of traffic and so Dr. Stanley hopped onto a motorbike and met us on the way," she explained.

"I had never seen such darkness in a while. Everyday I thought I had seen the worst, I saw the ‘worstest’ the next day... I watched my husband constantly knock death’s door but still wore God’s amour..Maybe he was knocking the door so he could knock the devil off," she posted.

The mother of two praised her husband for being a fighter.

" @thekingkaka put up a fight. He never gave up and if he ever did once, he never showed it."

Nana is happy her hubby is back on his feet and said she will never stop thanking God for giving him a second chance.

"Such a fighter, proud of you king." teacherwanjiku said:

"Waking up is a blessing! I am glad to see you are doing so much better! We thank God for you! king." nazizihirji said:

"May the Mighty God grant him healing in Jesus name." alibabakenya:

beckygifty4 said:"My [email protected] your strength has inspired me a lot. Was shocked when the news came out that your hubby had been sick for three months or so. The whole time you showed us your normal smile. The world didn't see the broken part inside you. Receive hugs. You really portrayed the character "strength of a woman". Proud of you." mercie_keila wrote:

"Nana there is a God in heaven who answers prayers, then you are a strong woman mama may God bless you." Peter K. Peter:

"Marry your friend, he/she will always understand you." Nancie Nancy:

"True love in our age is rare. God bless the couple and give them good health." s.h.e.r.r.y_muruga:

"He is a living [email protected] may God always bless you." karahjoan: