Vincent Mboya, an upcoming musician who gave Jalango’ 48 hours to pick his KSh 18,000 has sparked a series of mixed reactions from Kenyans online. 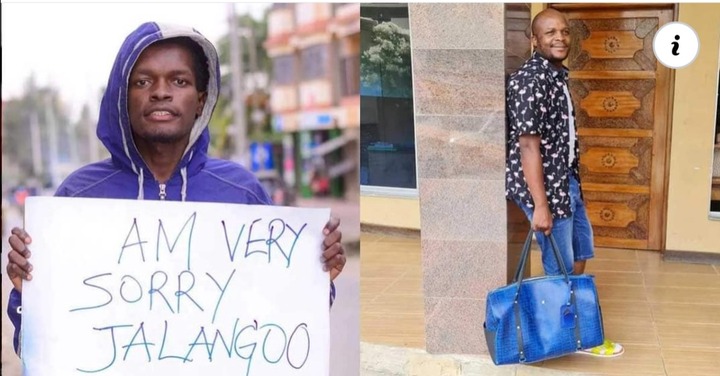 Mboya has sent his apology to Jalang'o saying that he would now focus on his life and has urged Kenyans to support his music and his dreams in the entertainment industry.

The controversial upcoming musician rose to fame when he called on Radio Presenter and Comedian Jalang'o to pick back his money which he had assisted him with along the streets of Nairobi.

According to Mboya, he wanted Jalang'o to reclaim his money claiming that the comedian was disrespectful in lending a helping hand to him when he met him.

In wanting Jalang'o to reclaim his money, he claimed that the manner in which the comedian tomld him to go out wnd work hard was not in order and was a show of disrespect.

The move to apologize to Jalang'o has triggered a series of mixed reactions from Kenyans who have stormed the internet to pen various thoughts including;