By Peter.ekuru.com (self media writer) | 2 months ago 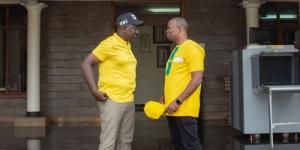 Comedian Jasper Muthomi, popularly known as MC Jessy has come to disclose how he was duped with a campaign job after meeting Deputy President Wiliam Ruto on Wednesday last week, April 13.

Speaking on Thursday, April 21, Jesse revealed that on a fateful day, he was called for a meeting at the DP's office in Karen alongside his competitor in the race for the UDA ticket in the Imenti South parliamentary race. The nominations were scheduled to happen the next day on April 14.

According to the comedian, the DP implored them to settle on one candidate through consensus and they agreed to continue with negotiations at a later date.

However, the comedian narrated that he was shocked to see the Deputy President send out a statement claiming that Jessy had stepped down in favour of another United Democratic Alliance (UDA) candidate, Mwiti Kathaara.

"I went there knowing that I was the prominent aspirant, I had even told the people that were we going for nominations. Maybe the mistake I made was to accept dialogue.

"I did not stand there to admit that we had agreed to step down, when people visit Ruto's residence they take photos and the information about me stepping down was shared later on social media platforms. That was not what we agreed," Jesse insisted.

Jessy made it clear that he did not accept to relinquish his seat in favour of Kathaara and that he had decided to vie as an independent candidate after his supporters learnt of the trick played on him.

According to the comedian what transpired in the meeting, is not what was made public afterwards.

Addressing the photos of him shaking hands with Ruto, Jessy detailed that the photos were taken before the meeting with Ruto and other UDA officials.

"MC Jessy will join the presidential campaign team after postponing his parliamentary bid in favour of Mwiti Kathaara for the South Imenti Seat,” Ruto had posted on his social media handles. The posts were pulled down on multiple occasions without an explanation.

Despite the fallout, Jessy maintained that he would still support Ruto's presidential bid in the August 9 General Election.

"The lesson I have learnt is to never trust a politician. And avoid confiding people about your political moves before you never know what they do with it," the ex-Churchill show star remarked.

Not Sure If He Is The One For You Or Not? These Tips Will Help You Come To A Decision

Everything About Her Is Fake: Amber Ray Exposed Badly By Ex-Boyfriend