By YoboNews (self media writer) | 4 months ago

What’s better than keeping up with your favourite celebrities? Finding out that there’s more DNA where they came from.Although they say that lightning never strikes the same place twice, the opposite seems to be true for celebrity siblings here in Kenya.

Kenyan household names that are blood relatives, have been dominating the entertainment industry since the times of Habib, younger brother to E-Sir, born Issah Mmari Wangui, who had a brief but iconic presence in the Kenyan music scene.I rounded up some of Kenya’s high-profile sibling pairings. 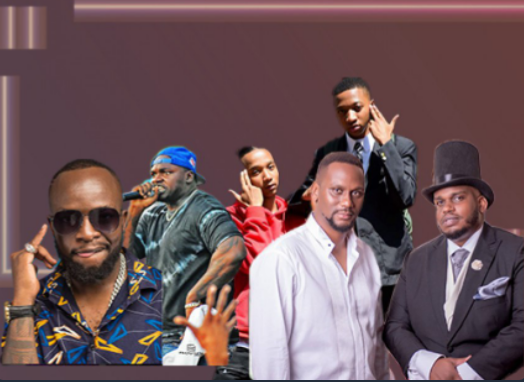 Span is the elder brother to Khaligraph and is known for numerous tracks including ‘Mare Mare’ with music band Matata and other solo hits among them ‘Scorpion’, ‘Fresh’, ‘Nikona Form’, just to mention a few.

The two are rappers and have collaborated together in several top songs including, ‘Me Siogopi’, ‘Luku’ and ‘Khali Cartel 1’.

Trio Mio during one of his many interviews revealed that he is related to fellow rapper Big Ting AP. The duo featured together in a hit dubbed ‘Kanairo’.

Eric, the self proclaimed president of comedy in Africa, and his younger brother Fred are both gifted funny men that keep their audience entertained.

Having both been part of the Churchil show, the duo has called the heights in the Comedy Industry.

Joey, who is a media personality, previously a presenter at Capital FM, is sister to Holy-Dave, a gospel musician and former presenter at Citizen TV’s Bambika show.

Janet, a renowned media personality is the twin sister to Timothy, who owns a high-end barbershop in Kilimani, Nairobi.

In the same light, Janet’s husband Eddie Ndichu also has a twin brother Paul Ndichu. The two were recently on the news over an alleged assault incident at the Ole Sereni Hotel.

Voice over artist and radio presenter Tina is the younger sister to Dennis Kaggia, better known as DNA, a multi-talented musician and rapper, known for the much-acclaimed Banjuka anthem.