By TelegraphKenyanews.co.ke (self meida writer) | 29 days 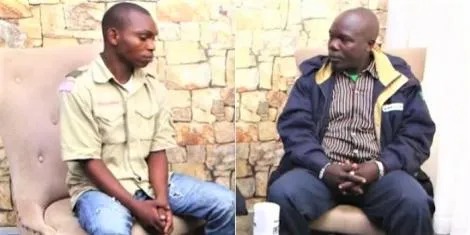 In the 2011 interview conducted by K24TV, Matendechere was displeased by Musyoka's claims that illegal electric connections at Mukuru kwa Njenga slums disabled his right arm.

The duo met for the first time in a decade at an interview with Kiss FM presenter Felix Odiwour (Jalang'o) who promised to turn around their lives.

"I will provide two motorcycles, one for each of you so that you can do something constructive in the estate.

"I also spoke with the CEO of a flour company. He reached out and asked the two of you to be the company's brand ambassadors," Jalang'o disclosed, adding that the viral duo will be featured in an upcoming advertisement.

Musyoka had lamented that he was jobless and would appreciate any menial jobs offered. Matendechere, on his end, stated that he had a barbershop, cafeteria and was also a boda boda rider.

Jalang'o urged other well-wishers to step out and aid the two and other Kenyans who were languishing in poverty.

Individuals suspected to have taken advantage of the viral video, ntakufinya phrase and images of the duo were further cautioned of copyright laws and image rights.

"I kindly request that they reach out and compensate us. We can also share the spoils," Matendechere added.

He appreciated that finally, the 'government' had offered Musyoka a job just as he had wished.

In the viral K24 TV video, Matendechere asked Musyoka to stop lamenting, cautioning that, "Stop talking about electricity matters. Let the people involved speak about it. Ask the government to give you a job."

He walked away irked, threatening to deal with Musyoka . "Ntakufinya," he said to which Musyoka responded 'Finya'.

Matendechere, nonetheless, clarified that he wasn't an electricity cartel as people claimed, but was defending Kenya Power and Lighting Company (KPLC). The two made peace by shaking hands during Jalango’s interview.